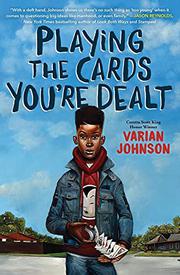 PLAYING THE CARDS YOU'RE DEALT

Spades is as much a game of partnership and trust as it is about cunning and trash talk, but when the deck seems stacked against Anthony, he’s forced to consider what it means to be a good card player as well as a good (young) man.

Ten-year-old South Carolina native Anthony Arnold Joplin prefers Ant; to his chagrin, however, the nickname “little man” has stuck. He’s short. He gets it. But when his spades partner and best friend Jamal’s constant ribbing leads even to Shirley, the cute new girl from Texas, teasing Ant about his height, he starts questioning his skills, his relationships, and how his so-called best friend makes him feel. Eventually, Ant and Shirley hit it off despite Ant’s being too shy to admit it, but issues in the Joplin household and Jamal’s own volatility put a lot of stress on this budding relationship. Ant’s father is an alcoholic and gambler with a lot of reductive opinions on masculinity that confuse the naturally compassionate and thoughtful Ant. Spades becomes a way for Ant to prove himself to his father and hopefully mend some familial wounds, as well as a compelling allegory for the ways he must navigate some uniquely thorny setbacks. A charismatic omniscient narrator explains the intricacies of the game and its venerable position in Black American culture. Realistic character and community portrayals give a difficult story a great amount of heart. Main characters are Black.

A story about showing great courage and perseverance when life gets shuffled.