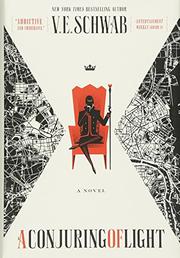 A CONJURING OF LIGHT

From the Shades of Magic series, volume 3

The action-packed conclusion to a rich and absorbing fantasy trilogy.

Kell has been taken prisoner in White London, trapped in a collar that dampens his magic. His magical connection to his brother, Prince Rhy—the connection that keeps the prince alive—is weakening. Alucard Emery is helplessly watching Rhy, his former lover, fade as that connection begins to break. The White London magician Holland is being slowly taken over by the dangerous, powerful, Black London “shadow king” known as Osaron. And Osaron has his sights set on devouring the magic-rich prize of Red London. But Lila Bard is ready to do the impossible to save Kell and the world—starting by crossing the barrier between worlds by herself, using her own newfound power, for the first time ever. This third and final book in the Shades of Magic series begins where A Gathering of Shadows (2016) left off and keeps up a breakneck pace as our heroes struggle to find a way to stop a magical demon/god who can possess almost any human host. Schwab has created an apocalyptically powerful villain, and the stakes couldn’t be higher. Desperate gambits, magical battles, and meaningful sacrifice make this a thrilling read—and there’s even a little time to further complicate and deepen some of the series’ compelling characters.

Fans will gobble up this final battle, in which the characters they love fight desperately to save everything they hold dear. Schwab has fully delivered on the promise of this inventive and captivating series.