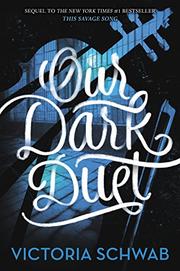 From the Monsters of Verity series, volume 2

In a world where monstrous acts beget actual monsters, what is humanity?

Picking up six months after This Savage Song (2016), this duology conclusion opens with Kate (human, white, deaf in one ear) and August (not human, fair-skinned) separated; he’s in quarantined, monster-ridden supercity Verity, embracing his purpose, which is to reap those who have committed violence. Meanwhile, Kate has escaped to Prosperity, where she’s teamed up with what feels an awful lot like the Scooby Gang of Buffy fame to fight more monsters. The story starts slowly but picks up when Kate returns to Verity on the heels of a monster that breeds violence; the Malchai and Corsai just kill people, and the Sunai reap souls, but the Chaos Eater causes people to turn on one another in acts of unrelenting carnage. Kate joins August and the Flynn Task Force to fight the Chaos Eater and the lead Malchai, and her presence helps August find himself again. The breakneck pacing of the climactic latter half eventually resolves into a poignant ending. Too many peripheral characters—including a nongendered Sunai whose representation is exciting but problematic—and too much time with figurative mustache- (and literal dead-body–) twirling villains detract from what works, although Schwab’s style is on point, as always.

Happily, the many ardent fans waiting for this volume probably won’t mind its snags, they’ll just delight in the feels.