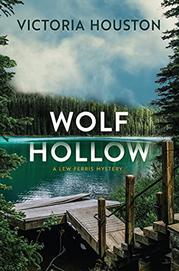 A police chief must solve the murder of a family member.

Chief Lewellyn Ferris is knee-deep in her reelection campaign when some kids attempt to detain a man they claim is a sexual predator. One of them is the granddaughter of Lew’s significant other, forensic dentist and fishing fanatic Doc Osborne. The accused is Noah McDonough, son of acerbic, wealthy Grace, who owns enough land in Wisconsin’s Lake Country to give her a lot of power. Meanwhile, Lew’s brother, Pete, who’s been watching a loon’s nest in an effort to protect the fledglings, is attacked and killed. The wife he’d planned to divorce, who can’t get the funeral over with fast enough, announces that he had a heart attack. A suspicious Lew calls in an outsider to do an autopsy that reveals Pete was murdered. Lew calls on Ray Pradt, a friend, fishing guide, and tracker, who discovers a pry bar thrown in the woods and several trail cameras that may have captured images of the killer. To Lew’s surprise, Pete’s murder may be linked to Grace McDonough, who’s secretly planning on selling a parcel of land along a pristine river to a mining company. When Grace is found dead in another faked accident and Lew learns that her sister-in-law was having an affair with the appraiser involved in Grace’s planned sale, she has to decide if the motive is love or money.

Houston’s loving portrayals of the continuing cast members and the wild Wisconsin settings add up to a charming read.