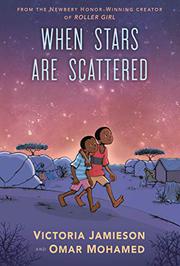 WHEN STARS ARE SCATTERED

A Somali boy living in a refugee camp in Kenya tries to make a future for himself and his brother in this near memoir interpreted as a graphic novel by collaborator Jamieson.

Omar Mohamed lives in Dadaab Refugee Camp in Kenya with his younger brother, Hassan, who has a seizure disorder, and Fatuma, an elderly woman assigned to foster them in their parents’ absence. The boys’ father was killed in Somalia’s civil war, prompting them to flee on foot when they were separated from their mother. They desperately hope she is still alive and looking for them, as they are for her. The book covers six years, during which Omar struggles with decisions about attending school and how much hope to have about opportunities to resettle in a new land, like the United States. Through Omar’s journey, and those of his friends and family members, readers get a close, powerful view of the trauma and uncertainty that attend life as a refugee as well as the faith, love, and support from unexpected quarters that get people through it. Jamieson’s characteristically endearing art, warmly colored by Geddy, perfectly complements Omar’s story, conjuring memorable and sympathetic characters who will stay with readers long after they close the book. Photographs of the brothers and an afterword provide historical context; Mohamed and Jamieson each contribute an author’s note.

This engaging, heartwarming story does everything one can ask of a book, and then some.