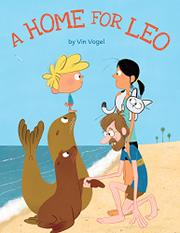 A HOME FOR LEO

This lighthearted tale of a child reared by sea lions is completely outlandish yet manages to capably address very real feelings about belonging and identity.

Leo, a young, white, blond boy, is pictured flying out of a boat during a storm even before the title page; he’s subsequently taken in by a family of sea lions. This looks like kid heaven—bodysurfing with sea lion pups, romping in a whale’s spout, and sleeping under the stars—but Leo feels and looks “different,” until he meets ”a creature who looked like him.” This creature, a young biracial, brown-skinned girl with hair in two ponytail puffs, really does look like him: They are both human. Once reunited with his human family, Leo is happy again, but as before, something is amiss. He still says “Ark! Ark!” and misses “his other family…and the sea.” Not explicitly about transracial adoption or blended families, this is about a child longing to belong, and the simultaneous feelings of happiness and alienation here ring true. Vogel’s stylized digital illustrations have an appealingly cartoonish look, with googly eyes on both humans and animals. Humorous scenarios (Leo sitting in a restaurant seafood tank; a sea lion in the bathtub with a gull on its head) visually portray the contrasts Leo feels. The happy ending, when Leo’s human family moves to the seaside so people and sea creatures can live together, is perhaps unrealistically optimistic, but this is a story of a child raised by sea lions, after all.