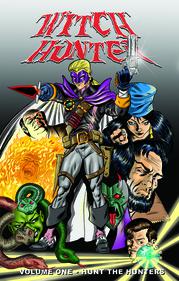 From the Hunt the Hunters series, volume 1

In Ferrante’s debut graphic novel, a 17th-century man uses magical powers and weapons to battle evil witches and creatures in the modern day.

In 1692, Jon Redmont’s mother, knowing her Coven of Light will burn at the stake, casts a spell to preserve her son’s soul in a crystal. Three hundred years later, Jon awakens imbued with the coven’s combined power. He’s essentially a superhero, complete with enchanted cloak, mask, and weaponry. Jon vows to combat the Scarlet Circle, a fiendish group of witches and other creatures, such as dark elves, threatening the contemporary world. He first retrieves a stolen witch watch—a device that allows him to open portals to “almost anywhere”—and after settling in “New Yorke City,” he offers his services to the general public in a magic-infused advertisement. His rescue of a kidnapped girl ultimately dredges up someone with a connection to the Scarlet Circle: Elesar Monmorte, who sets his sights, and minions, on Jon. Elesar was the mastermind of the Coven of Light’s massacre and now wants the man who somehow escaped death all those years ago. Ferrante’s graphic novel, which collects four comic-book issues, features a bevy of vibrant characters. For example, Jon’s mysterious aide, Kitty Allen, dons Venetian masks that allow her to see others’ “true nature,” and Elesar gets a lengthy, absorbing origin story. But although that villain and an assortment of henchmen provide a sense of menace, Ferrante keeps the tone light with one-liners, visual gags, and even a mock ad for Scarlet Circle Cookies. Some of the violence, too, is played for laughs; in one memorable scene, Jon chops and shoots his way through countless monsters—and one of them, post-beheading, asks to see a doctor. Although several different artists provided illustrations, the artwork is consistent, particularly when portraying Jon’s bright purple costume and perpetual smirk.