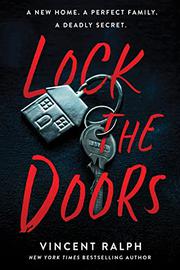 A blended family seeks a fresh start in a new home.

Tom’s mother believes that the family may have finally found happiness. After years of dating losers, she’s finally settled down with a nice guy—and that nice guy, Jay, happens to have a daughter, Nia, who is just a little older than Tom. The new family has moved into a nice new house, but Tom can’t shake the feeling that something’s wrong. They discover a strange message written on the wall when they are stripping the old wallpaper, and there’s clear evidence that the previous owners had installed locks on the exteriors of the bedroom doors. Those previous owners happen to live a little farther down the street, and Tom quickly becomes obsessed with their teenage daughter, Amy, and the secrets she’s hiding. This obsession unfortunately becomes a repetitive slog involving many pages of Tom’s brooding and sulking over the same bits of information while everyone tells him to move on. Readers will be on everyone’s side. But then, a blessed breath of fresh air: The perspective shifts to Amy, and readers learn in spectacularly propulsive fashion exactly what she’s hiding. Regret and intrigue blend perfectly as Amy divulges her secrets. Alas, we return to navel-gazing Tom for the book’s final pages, and everything ends with a shrug. Main characters default to White.

A crackerjack thriller done in by its own dopey protagonist.