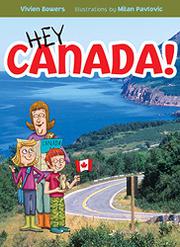 Bowers’ travelogue is similar in tone and content but aimed at a younger audience than her Wow Canada (2010) (and proceeds east to west before looping north, rather than the reverse). She takes her 9-year-old narrator to cities, roadside attractions and natural wonders from Cape Spear to Iqaluit. The child's observations are interspersed with side comments (“We walked around the lake until the mosquitoes had sucked all our blood”) and brief info-dumps from tour guides, a fact-loving little cousin and others. Simplification leads to some misinformation (no, the West Edmonton Mall is not the “world’s biggest,” nor is it strictly accurate to claim that Lake Michigan is “the only [great] lake not in Canada”). Ultimately and unfortunately, readers will come away knowing much more about regional foods (“Tried eating haggis. Big mistake”) and other artifacts of European settlement than newer immigrant populations or even, until the chapter on Nunavut, First Nations.

Still, for armchair tourists, a broad if rosy picture of our neighbor to the north.