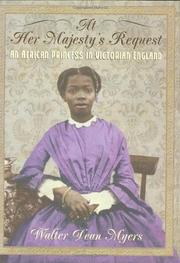 AT HER MAJESTY'S REQUEST

An African Princess in Victorian England

Working from a packet of letters found in a London bookshop, Myers reconstructs the life of one Sarah Forbes Bonetta, a child of royal African descent who was rescued by a British sea captain from a sacrificial rite in Dahomey, became a goddaughter of Queen Victoria, and grew up in a succession of upper middle-class households. A celebrity in her day, Sarah, or Sally, as she was also known, visited the Queen regularly, traveled repeatedly between England and Africa, grew up to marry a West African businessman, named her first born Victoria, and died of tuberculosis in 1880, aged about 37. Filling in gaps with well-chosen passages from newspapers, memoirs, and the Queen’s diary, plus occasional speculations—“Snow! What must she have thought of snow?”—Myers (Angel to Angel, p. 498, etc.) creates a credible, perceptive picture of her probable experiences, adding for flavor detailed accounts of her wedding, a royal wedding she attended, and a general glimpse of London street life. He suggests that, although she may have felt caught between two worlds, and fully comfortable in neither, she had a lively intelligence and a gracious, forgiving nature. A generous selection of contemporary prints and photographs includes both British and African scenes, as well as portraits of Sarah and both Victorias. This solidly researched biography will enthrall readers, and ranks among Myers’s best writing. (Biography. 11-13)