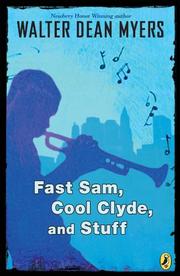 Stuff, the youngest, moves to 116th Street when he is twelve and a half, and this is by way of a fond memoir of the kids he came to hang out with. He is tightest with Cool Clyde, the gentle leader, and with Fast Sam, who can fight when he has to but is better at running; signify-in' Gloria is a good friend too and there are three or four others—all of whom feel so good about each other that the whole gang forms a club called the 116th Street Good People for mutual support and consolation in times of individual trouble. It's a far tamer bunch than the one Bethan-court ran into in Brooklyn (KR, p. 464, J-160), but they do have their typically inner-city adventures: the whole gang landing in jail for disrupting the hospital they rush to after Robin from another neighborhood bites a piece of Binky's ear off in a fight. . . Cool Clyde and Fast Sam winning a $50 dance prize as a couple—until Clyde rips off his girl's wig to sock a guy who tries to soul kiss him. . . all of them helping to save 118th Street Carnation Charlie from dying of an OD—only to hear later that despite the Good People's desire to help, Charlie has been killed during an attempted holdup. Stuff can be a little long-winded in Holden Caulfield-like digressions, and his friends awfully earnest in their discussions of sex and drugs, but in general his colloquial first-person narrative projects a sense of enviable group rapport with an easy mix of nostalgia and humor.