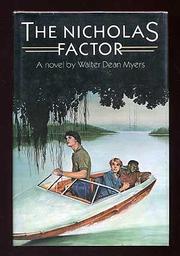 In this junior-grade spy thriller Myers moves from his easy colloquial stories of good-doing Harlem teens to older characters—narrator Gerald McQuillen is a 17-year-old college freshman—and a less innocent, warier view of self-appointed world-savers. The youth group in question is an international organization called the Crusaders, recruited from "the brightest and the best" by Marvin, a middle-aged American professor inspired by a vision of the children's crusade and its ten-year-old German leader. Gerald, who sees the Crusaders as smug elitists, turns down an invitation to join—until he's contacted by a government agent who wants him to keep an eye on the group. Soon, then, Gerald is with a Crusader corps in deepest Peru, on a cockamamie project reputedly designed to shoe the natives against a parasite that enters through the feet, but actually set up by the power-hungry right-wing German Crusader Kohler to discredit Marvin and take over the group. "Boy scouting around the jungle," as Gerald well puts it, he suspects that something is "all wrong." He is sure of it when his African roommate Andwele becomes fatally ill; and finally Gerald and girl Crusader Jennifer are fleeing the camp by boat and plane and rented car, closely pursued by Kohler whose deliberately contaminated water and "medicine" has managed to kill not only Andwele but a lot of local Indians as well. The chase and the boy-girl match are strictly standard stuff; and if The Nicholas Factor represents a shaky advance in political sophistication, the implausible motivation of all the Crusaders, villains and dupes alike, requires an overgenerous suspension of judgment.