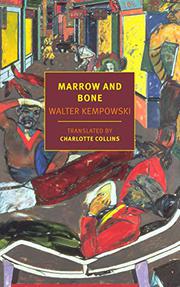 A West German writer takes an assignment in Poland that exposes layers of lingering war trauma.

It’s 1988. Journalist Jonathan Fabrizius is living in Hamburg, in an apartment that survived World War II, but his relationship with his girlfriend, Ulla, is crumbling. While she works on an art exhibition about cruelty, he prepares for an assignment to help a luxury carmaker chart a promotional tour through Poland. That’s where, in the war’s waning days, his father was killed in combat and his mother “breathed her last” giving birth to him. “As far as suffering was concerned, this guaranteed him an unparalleled advantage over his friends,” he thinks. He has a pretty easy life, but his outlook is morbid, his humor so biting it’s usually more shocking than funny. Then, just as a reader is settling in for a long, coldhearted meditation on irony, the road trip across Poland begins, and a novel of broad historical and emotional significance unfolds. Kempowski (who died in 2007 but whose All for Nothing was released in English in 2018) captures the zeitgeist of pre-unification Germany in sharp, darkly engaging prose. One traveler marvels “that all the Poles were so friendly. To us Germans! After what we did to them. A third of the population exterminated and all the towns and cities destroyed!” and in the next breath is complaining about the hotel’s scrambled eggs and sweet rolls. First published in German in 1992, this is a time capsule that feels contemporary as it looks for answers to big questions about war and suffering.

Probing a part of WWII that few Americans know, Kempowski reveals how the damage goes on long after the guns fall silent.