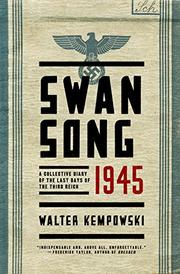 A Collective Diary of the Last Days of the Third Reich

From the absurd to the sublime, and everywhere heartbreaking: a collage of voices from the tail end of the world’s conflagration.

In 2005, German novelist Kempowski (1929-2007) published this cross section of voices, ordinary and otherwise, commenting on the end of World War II in German as part of a series of compositions largely exploring German guilt for the war. Over 20 years, he collected an astonishing array of autobiographies, letters, diaries and other documents to create a raw, tremendously moving set of reactions to the momentous events of April through May 1945: the lugubrious birthday celebrations of Adolf Hitler on April 20, the Allied liberation, VE-Day, and the very different takes by the international participants on the final signing of Germany’s capitulation at Karlshorst, Berlin, on May 8. In the preface, Kempowski notes that he composed this wealth of voices like an imagined Tower of Babel, revealing a similarly teetering longing by frail and inadequate humans for some kind of recognition of or consolation for their experience and suffering. Among dozens of other situations, the author examines German soldiers lying wounded in American hospitals; Joseph Goebbels, the “diabolical seducer,” continuing his vituperative radio address, declaring that “Chaos will be tamed!”; the scores of Berliners vulnerable to the retribution of marauding Russians; the prisoners in concentration camps, hanging by the barest thread; Field Marshal Wilhelm Keitel, persistent in his maddeningly correct accounts until the very last signing ceremony; and Hitler’s own final maniacal insistence that the blame of the war lay squarely with the Jews. Kempowki juxtaposes the voices of the poignantly unknown with the famous—from Thomas Mann eagerly following the movements of the Allied armies into Germany from his home in Los Angeles to Edmund Wilson in London wondering what the “roast duck” on the menu really was (probably crow).

A riveting portrait of what Kurt Weill called the “total breakdown of all human dignity,” revealed through the bric-a-brac of war-shattered lives.