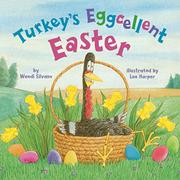 From the Turkey Trouble series

The fourth entry in the Turkey Trouble series finds Turkey and his animal friends attending a children’s Easter egg hunt at a park next to Turkey’s farm.

Turkey and his pals want to win an “eggstraspecial” prize at the egg hunt, but the event is only for children—not animals. So the group of animal friends decides to attend the egg hunt in disguise and treat their adventure as a “secret mission.” Their disguises include dark glasses and costumes suggesting a rabbit, a bee, and a bunch of daffodils, but each attempt to participate in the egg hunt is rebuffed by the human attendees. The animals work together to create a large, egg-shaped costume for Turkey from a wicker basket, and Turkey and the boy who finds him in egg mode both win special prizes. Turkey shares his prize of a huge, jelly-bean–topped pizza with all his animal buddies. The mildly humorous story has funny animal characters, inventive action, and lots of puns incorporating “egg” into other words. Cartoon-style watercolor-and-pencil illustrations add to the humor with amusing animal expressions and the ongoing series theme of silly costumes. Several of the children at the egg hunt are children of color; the other human characters present white.

Not the most eggceptional tale on the Easter story shelf but still a fun-enough outing for fans of Turkey’s holiday-themed series.