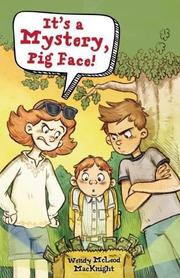 IT'S A MYSTERY, PIG FACE!

Tracy—gratingly—delights in calling her younger brother “Pig Face”; although she has a reasonably amicable relationship with him, she appears oblivious to the hurtful nature of her chronic name-calling.

But, surprisingly, since “Pig Face” comes up over and over, that is not the point of this overlong debut novel for early chapter-book readers. Tracy, 11, her best friend, Ralph, and her astute 9-year-old brother Lester, aka Pig Face, embark on the investigation of a mystery: why was a bag of money left in the detritus under the dugout bench of their small Canadian town’s ballpark? Slightly complicating their investigation is the presence of handsome visitor Zach, whom Tracy is developing a crush on and Ralph (perhaps partly because of that) dislikes. Tracy, Ralph, and Lester, all white, pursue their investigation in a kid-appropriate way, hiding the money and asking around, using a way-too-obvious approach that’s sure to spell trouble later—and it does. There are plenty of red herrings and an unexpected villain in this plot-driven adventure that eventually explores bullying but never, disappointingly, addresses the “pig face” problem. Tracy is a colorful character, dressing in vintage clothing and not ashamed of her intelligence, and Lester is amusingly wise for his years, their well-rounded characters adding authenticity.

A summer adventure that determined young readers may enjoy.