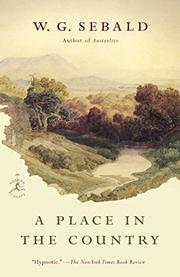 A PLACE IN THE COUNTRY

The late German novelist’s essays of appreciation for writers and artists whose influences pervade his work.

The last book published by Sebald receives its first English translation, after it was issued in Europe in 1998. American readers will likely find it illuminating for its insight into the author’s work and its obsessions, themes, and observations on home and exile. When he writes, in his essay on Rousseau, how “one could also see writing as a continually self-perpetuating compulsive act, evidence that of all individuals afflicted by the disease of thought, the writer is perhaps the most incurable,” it’s plain that this writer is also writing about himself. The longest, most ambitious and revelatory essay is subtitled “A Remembrance of Robert Walser,” who was diagnosed as a schizophrenic, died institutionalized, and was little-known or -read when he was alive: “The traces that Robert Walser left on his path through life were so faint to have almost been effaced altogether.” Yet Sebald’s critical resurrection will likely spark the reader’s interest in an author “who almost always wrote the same thing and yet never repeated himself” and who felt that “he was always writing the same novel, from one prose work to the next—a novel which, he says, one could describe as ‘a much chopped-up or disremembered Book of Myself.’ ” (Walter Benjamin remarked that the characters in Walser’s fiction came “from insanity and nowhere else.”) Contemplating the work of others, Sebald writes from a writer’s rather than a reader’s perspective, of one who shares the affliction, who recognizes that, as he writes of painter Jan Peter Tripp, “beneath the surface of illusion there lurks a terrifying abyss. It is, so to speak, the metaphysical underside of reality, its dark inner lining.”

This last word from the novelist provides a nice footnote on his own writing.