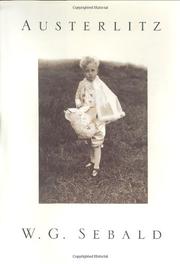 Another haunting mixture of history, memoir, and photo album from the author of The Rings of Saturn (1998) and Vertigo (2000).

Sebald’s fourth novel, like its predecessors, is a melancholy meditation on the dark side of human history. The unnamed narrator recounts the life story of Jacques Austerlitz, a polymath whose erudition, like the author’s, runs the gamut from his chosen field of architectural history to his avocation of zoology. Meeting by chance in the Antwerp railroad station, Austerlitz and the narrator fall easily into a learned conversation about the building itself that gradually leads to a discussion of the history and mysteries of Europe’s fortified cities. A friendship of sorts develops and the two meet from time to time, at first apparently without planning, to continue their chat as if no time had elapsed in between. Gradually, Austerlitz begins to reveal his personal history. In 1939, at the age of five, he was adopted and raised by an austere Welsh cleric and his equally forbidding wife. He knows nothing of his past until he is encouraged to explore history by an inspirational teacher. Eventually, Austerlitz discovers that he is a child of a Jewish couple who vanished in the Holocaust after sending him to England to escape—no surprise to those who are familiar with Sebald’s earlier work. Austerlitz recounts his story in a low-key, slow-moving, but utterly engrossing prose style, with almost no paragraph or chapter breaks, interrupted only by a series of eerie photographs of landscapes, architectural features, and hazily glimpsed faces. The tale is cunningly constructed around internal echoes, phrases repeated many pages apart, whose larger significance can be grasped only on repetition, and a complex, multilayered set of thematic correspondences that cannot be unraveled on a single reading.