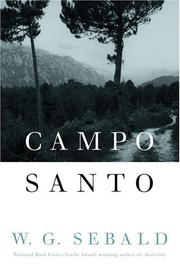 A miscellany of 16 literary and personal essays comprise the last testament of the late German-born author (1944–2001).

Sebald (Austerlitz, 2001, etc.) was a polymath whose hybrid narratives link him with such resisters of fixed classification as Borges, Calvino, the antiquarian Robert Burton, and Guy Davenport. His methods are perhaps best displayed in his travel writings—for example, those on the island of Corsica (about which he’d planned to write a book) in the opening four pieces here: on Napoleon Bonaparte’s art-collecting stepuncle, a walking tour of an ancient cemetery, and the influence of Corsica’s forested terrain on its history and folklore. Further essays focus to one degree or another on the experience of growing up in postwar Germany and the ways in which that period’s literature was shaped by the phenomenon of collective guilt. Sebald finds a precedent for the relevant intertwining of “Strangeness, Integration, and Crisis” in the legend of “wild boy” Kaspar Hauser, as depicted in Jacob Wassermann’s now-forgotten eponymous novel and Peter Handke’s challenging play Kaspar. He analyzes literary efforts to justify, explain away, or condemn Germany’s militarism in two superb analytical pieces: a consideration of the experience of “total destruction” as described by little-known writers Hermann Kasack, Alexander Kluge, and Hans Erich Nossack (“Between History and Natural History”); and a celebration of those who focused a salutary skepticism on “the myth of the good German”: notably, Wolfgang Hildesheimer, Heinrich Böll, and Günter Grass (“Constructs of Mourning”). Brief tributary essays on Kafka, Nabokov, and Bruce Chatwin follow, as do more autobiographical pieces, including one arguing that “only in literature . . . can there be an attempt at restitution over and above the mere recital of facts.”

Sebald’s body of work proves that claim true, and it’s good to have these further products of his life-affirming imagination and spirit.