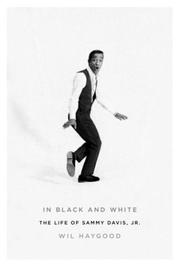 IN BLACK AND WHITE

The Life of Sammy Davis, Jr.

Robust update and emendation of the entertainer’s well-known autobiography.

Sammy Davis Jr. (1925–90) wasn’t black inside, wasn’t white outside, writes Haygood (The Haygoods of Columbus, 1997, etc.). He was simply a performer. He never spent a day in a classroom. Soon after Sammy learned to walk, he learned to work. Under the aegis of his father and adoptive uncle, veteran vaudeville hoofers, he mastered flash dancing and the soft shoe. The hardscrabble life was exhausting and exhilarating, but the prodigy of “The Will Mastin Trio starring Sammy Davis Jr.” had energy to burn. He danced, sang, played various instruments, and did spot-on mimicry. Life on the road in the biz wasn’t life on the streets or the ghetto. Sammy’s buddies were Jerry Lewis, Tony Curtis, Jeff Chandler, and Eddie Cantor (without blackface) as well as the Step Brothers and the Nicholas Brothers. Color meant little until a quick stint in the Army brought a new awareness that he was not white, as many who knew him thought he wanted to be. Though he had previously married a black showgirl at the strong behest of the Mob, he preferred white women, especially blonds like Kim Novak and May Britt, whom he married. Throughout, he had a complex relationship with generous, arrogant Frank Sinatra. Sammy’s insatiable need for approval brought him to Richard Nixon, but he was no handkerchief-head, asserted friends like Harry Belafonte and Sidney Poitier (fighting popular black opinion). Haygood uses “Negro” consistently until the time in his narrative when “black” becomes favored as the story advances from Bill Robinson and Marcus Garvey past the Rat Pack to porn stars at the Davis Hollywood home. The movies, the clubs, the Broadway shows, the spending, the devastating results of bad driving, and the demons are all covered perceptively.

An American life considered with art and understanding in a major work of biography. (40 photos in text)