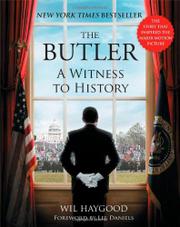 A Witness to History

When Haygood (Sweet Thunder: The Life and Times of Sugar Ray Robinson, 2009, etc.) was covering the campaign of Barack Obama in 2008, he knew beyond any doubt that the former Illinois senator “was indeed going to get to 1600 Pennsylvania Avenue, to the White House.” It was then that the author decided to see whether he could locate a black person “from the era of segregation” who had been a presidential servant. His investigations led him to an unassuming man named Eugene Allen. Born on a Virginia plantation, Allen grew up working as a houseboy for a white family. Possessed of refinement, discretion and a desire to make good in the world, he took a job as a waiter in a country club and then as pantry worker in the Truman White House, eventually rising to the rank of butler. From his unique vantage point “in the hard shadow of power,” Allen witnessed history unfurl before him. He watched as President Dwight D. Eisenhower called on federal troops to protect black high school students in Arkansas, and he witnessed a nation mourn the death of JFK and become embittered over Johnson’s escalation of the Vietnam War and Nixon’s role in the Watergate scandal. Allen’s story, which began as a front-page article in the Post, would become the subject of a much-anticipated film, The Butler, which Haygood also discusses in context of the fraught and elided history of African-Americans in Hollywood. The book is brief, but the two sections and many images of Allen’s quietly extraordinary life speak volumes about a nation struggling, and succeeding by degrees, to come to terms with an ignominious history of racial inequality.