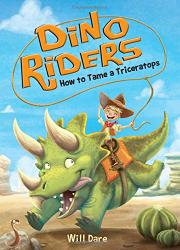 HOW TO TAME A TRICERATOPS

From the Dino Riders series, volume 1

Young Josh needs to up his ride if he’s going to win the Trihorn settlement’s 100th-anniversary Founders’ Day race and meet his hero, Terrordactyl Bill.

Set on the Lost Plains, where ranchers tend to herds of iguanodons, and horses (if there were any) would be easy pickings for the local predators, this series kickoff pits a brash lad and sidekick and schoolmates Sam and Abi against not only the requisite bully, but such fiercer adversaries as attacking pterodactyls. Josh’s first challenge after eagerly entering the race is finding a faster, nimbler steed than his steady but old gallimimus, Plodder. Along comes Charge—an aptly named, if not-quite-fully-trained triceratops with speed, brains, and, it turns out, a streak of loyalty that saves Josh’s bacon both here and in a simultaneously publishing sequel, How To Rope a Giganotosaurus, which prominently features T. Rex’s much larger cousin. Dare adds a map, as well as spot illustrations of rural Western types (Josh and Abi are white, Sam has dark skin and tightly curled hair) astride toothy, brightly patterned dinos. In both adventures Josh weathers regular encounters with dinosaur dung, snot, and gas as well as threats to life and limb to show up the aforementioned bully and emerge a hero.