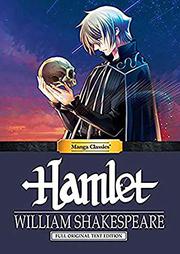 From the Manga Classics series

One of Shakespeare’s more tragic plays is the subject of a graphic adaptation.

As with the rest of the Manga Classics series, Chan has here kept the full script of Hamlet intact and, in collaboration with illustrator Choy, made this piece come alive. For readers who cannot make it to the theater to see Hamlet performed and for those who struggle to read the original, in particular, this is an accessible and appealing alternative. The visuals offer insights into the play, for example in the way that a character’s duplicity is shown with two versions of their face, each with different expressions, making concrete what is being discussed in the dialogue. Subtle visual clues such as the wearing (or not) of shoes encourage readers to speculate as to Hamlet’s and Ophelia’s sanity. In bringing to the page Hamlet’s famous “To be or not to be” monologue, Chan’s background research informs Choy’s black-and-white line drawings, which show the variety of emotions and layers of meaning expressed. Backmatter includes a character design sketchbook and notes from the adapter and illustrator that take readers behind the scenes of this graphic-novel version. The manga-style art will appeal to teen readers familiar with that genre. All characters read as white.

Does justice to a theatrical classic.