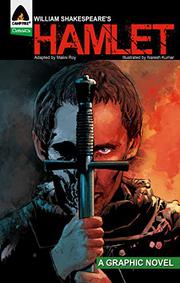 From the Campfire Graphic Novels series

Something is rotten in the state of Denmark.

The timeless tale of the young and disaffected Danish prince who is pushed to avenge his father’s untimely murder at the hands of his brother unfolds with straightforward briskness. Shakespeare’s text has been liberally but judiciously cut, staying true to the thematic meaning while dispensing with longer speeches (with the notable exception of the renowned “to be or not to be” soliloquy) and intermediary dialogues. Some of the more obscure language has been modernized, with a glossary of terms provided at the end; despite these efforts, readers wholly unfamiliar with the story might struggle with independent interpretation. Where this adaptation mainly excels is in its art, especially as the play builds to its tensely wrought final act. Illustrator Kumar (World War Two, 2015, etc.) pairs richly detailed interiors and exteriors with painstakingly rendered characters, each easily distinguished from their fellows through costume, hairstyle, and bearing. Human figures are generally depicted in bust or three-quarter shots, making the larger panels of full figures all the more striking. Heavily scored lines of ink form shadows, lending the otherwise bright pages a gritty air. All characters are white.

A solid introduction for budding lovers of the Bard.