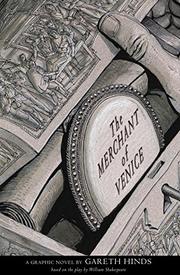 THE MERCHANT OF VENICE

Of late, there have been many unsuccessful attempts to adapt Shakespeare into the graphic-novel format; Hinds’s beautiful new offering now sets the standard that all others will strive to meet. Presenting readers with deftly drawn characters (based on live models) and easily read dialogue that modulates over the course of the work from adapted prose to the original Shakespeare, he re-works the classic Shakespeare play of deception, greed and revenge. Though located in a modern setting, readers will easily follow the premise and find themselves lost in the intricately lovely Venetian backdrop. While this adaptation may leave purists sniffing at the omission of entire scenes and characters, Hinds carefully explains to his readers in a note why and how he made those choices. A deceptively simple graphic novel on the surface, this volume begs for multiple readings on a closer level, at the same time acting as a wonderful introduction to the original. Easily on a par with his stellar adaptation of Beowulf (2007), it’s a captivating, smartly executed work. (Graphic novel. 12+)