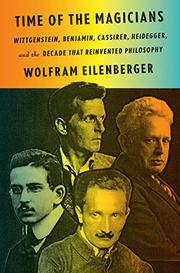 TIME OF THE MAGICIANS

Wittgenstein, Benjamin, Cassirer, Heidegger, and the Decade That Reinvented Philosophy

A readable, expert introduction to some of the most abstruse yet influential philosophical thought of the 20th century.

No quartet of contemporaneous philosophers ever had a greater impact on popular thinking, as well as on formal thought, than the figures whom Eilenberger terms “magicians.” That word is the single slip-up (and a minor one) in this enthralling tale of four men whose fresh consideration of thought, sign, and language—variously termed phenomenology, semiotics, linguistics, and epistemology—revolutionized serious philosophical thought in the decade after World War I. Ably translated by Whiteside, Eilenberger’s book is the kind of limpid presentation of Continental philosophical expression rare in books about the subject. It’s an achievement that has already won plaudits and prizes abroad. That’s no doubt due to the author’s own professional standing as a philosopher, but it also owes much to his approach: a multilayered exploration of the lives and thoughts of four very different thinkers at a time when Western and Central Europe struggled to emerge from war and economic crisis before slipping into the horrors of Nazism. The imposing Ludwig Wittgenstein, the hapless Walter Benjamin, the always troubling Martin Heidegger, and the steady, placid Ernst Cassirer emerge from Eilenberger’s portrait as formidable minds attached to flawed personalities whose sometimes barely comprehensible formulations nevertheless transformed the way human understanding is now seen by philosophers. The book’s special value lies in greatly advancing accessibility to these men’s works and thought. So clear and sometimes jaunty is Eilenberger that no reader will miss out from understanding the narrative. One can complain only that he, too, rarely makes known his own views. Otherwise, his lucid presentation of his characters’ often hard-to-comprehend thinking and the muddy language in which they expressed it make this book invaluable for anyone seeking to learn about these extraordinary figures.

An exemplary work of scholarship that is comprehensible to everyone.