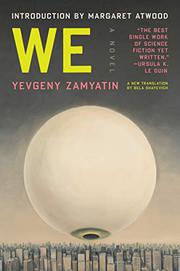 The founding document of dystopian literature, written in the Soviet Union in 1921, comes in for a fresh translation.

As Margaret Atwood notes in her introduction, this novel can be seen as a blueprint for the totalitarian regimes that would arise in the 20th century: Stalinism, fascism, Maoism, all those political entities in which the state is a machine that feeds on its people. Set in the 26th century, the novel imagines a world in which, following a Two Hundred Years’ War that concluded five centuries before—in our century, that is—the human world is organized under the aegis of the One State. Its protagonist, a “number” called D-503, is “just one of the One State’s mathematicians,” part of a crew that is building a spaceship called the INTEGRAL whose occupants will likely, the official newspaper proclaims, “encounter unfamiliar beings on alien planets who may yet live in savage states of freedom.” No such problem in the One State, where everything is under the “beneficent yoke of reason.” The One State is made up of cities walled off against nature and its “dense, green wildernesses,” all gleaming steel and glass. A smoothly turning cog of the machines that run the place, D–503 encounters a bohemian woman named I–330 who smokes cigarettes and drinks booze, all very much verboten, and who leads him to question his place in the brave new world. His unexercised loins stir, and he begins to think that visiting the other side of the wall might be a good thing. Alas, in a regime where “We sacrifice to our God, the One State, offering a calm, thoughtful, rational sacrifice,” such thoughts do not go unpunished. The plot is thin, but Zamyatin’s all-seeing state is sufficiently chilling all the same. Translator Shayevich does a good job of preserving his affectless, sometimes nearly robotic prose, and the book is highly readable—and indeed should be read.

A science-fiction classic, many of whose contours have become all too real.