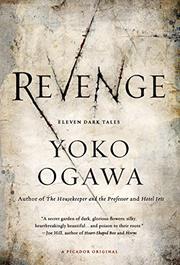 Ogawa (Hotel Iris, 2010, etc.) crafts 11 interlocking short stories with eloquent prose that belies the nature of the tales she spins.

A mother walks into a bakery to buy two strawberry shortcakes for her son’s birthday, a child who’s been dead for 12 years. A girl asks a classmate to accompany her to a meeting with her father as her mother lies in a hospital bed dying of cancer. What appears to be a collection of sympathetically worded, yet familiar, short stories then veers into the unexpected. With dark calm and disquieting imagery, the author leads readers on a journey of the macabre in a progression of tales that resound long after the last page is turned. An aspiring writer discovers that her landlady, who grows carrots shaped like hands, is a murderer. A cabaret singer whose heart developed outside her body asks a bag maker to sew a special one to house the heart, making it less cumbersome to carry, but she then tells him she’s having a surgical procedure to have the heart placed in her chest. A beautician tours a museum that houses torture devices and imagines using tweezers to pluck out her boyfriend’s hair, strand by strand, as he watches in a mirror, bound and helpless. Ogawa’s writing is simple and effective, and her technique for merging the tales demonstrates her mastery of the written word: A dead hamster tossed into a trash can in one story is glimpsed by a character in another; an uncle who invents a brace to lengthen the body becomes the caretaker of a museum, which then becomes the setting for other narratives. And although the stories may be perceived as gruesome, the author paints each tale exquisitely.