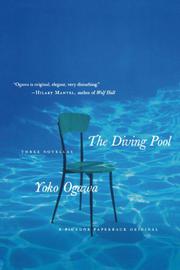 While Ogawa’s novellas aren’t technically linked, they are bound thematically—in each, a female loner is driven to explore the dark underbelly of her otherwise normal life. The first and strongest piece is narrated by the teenage daughter of a pastor who runs an orphanage. While she is raised with several siblings, she is the only child with “real” parents. She falls in love with one foster brother, obsessively watching his diving practice from the stands, but her only other pleasure is secretly torturing the youngest member of the household, toddler Rie. In the second novella, a woman goes to painstaking lengths to record the daily moods and eating habits of her pregnant sister, following her from a painfully long bout with morning sickness to a period of intense hunger and weight gain. The narrator literally feeds her sister’s needs, first abandoning cooking altogether to help her avoid nausea and then creating large batches of the grapefruit jam that she craves. But despite these efforts, it is difficult to tell how real the pregnancy actually is, and if not, which sister has fabricated it. Finally, the third novella deals with a young wife on the brink of joining her husband for a new life in Sweden. Instead of running the last-minute errands he assigns her from afar, she visits her old landlord, a triple-amputee with declining health and a questionable role in the disappearance of a young resident. The surreal plotlines of the three pieces interact brilliantly, underscoring the utter desperation to which extreme loneliness can lead.

A haunting collection, and a perfect example of the power of short fiction.