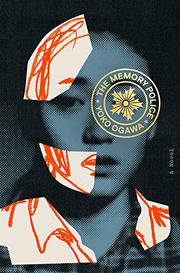 A novelist tries to adapt to her ever changing reality as her world slowly disappears.

Renowned Japanese author Ogawa (Revenge, 2013, etc.) opens her latest novel with what at first sounds like a sinister fairy tale told by a nameless mother to a nameless daughter: “Long ago, before you were born, there were many more things here…transparent things, fragrant things…fluttery ones, bright ones….It’s a shame that the people who live here haven’t been able to hold such marvelous things in their hearts and minds, but that’s just the way it is on this island.” But rather than a twisted bedtime story, this depiction captures the realities of life on the narrator's unnamed island. The small population awakens some mornings with all knowledge of objects as mundane as stamps, valuable as emeralds, omnipresent as birds, or delightful as roses missing from their minds. They then proceed to discard all physical traces of the idea that has disappeared—often burning the lifeless ones and releasing the natural ones to the elements. The authoritarian Memory Police oversee this process of loss and elimination. Viewing “anything that fails to vanish when they say it should [as] inconceivable,” they drop into homes for inspections, seizing objects and rounding up anyone who refuses—or is simply unable—to follow the rules. Although, at the outset, the plot feels quite Orwellian, Ogawa employs a quiet, poetic prose to capture the diverse (and often unexpected) emotions of the people left behind rather than of those tormented and imprisoned by brutal authorities. Small acts of rebellion—as modest as a birthday party—do not come out of a commitment to a greater cause but instead originate from her characters’ kinship with one another. Technical details about the disappearances remain intentionally vague. The author instead stays close to her protagonist’s emotions and the disorientation she and her neighbors struggle with each day. Passages from the narrator’s developing novel also offer fascinating glimpses into the way the changing world affects her unconscious mind.

A quiet tale that considers the way small, human connections can disrupt the callous powers of authority.