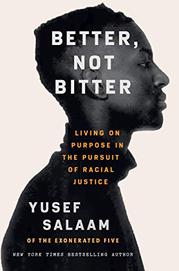 Living on Purpose in the Pursuit of Racial Justice

One of the wrongly accused and imprisoned Central Park Five recounts his experiences with an unjust system of justice.

Salaam was just 15 when he “was run over by the spiked wheels of justice.” That collision came when he was accused, along with four other teenagers, of raping a young woman in New York’s Central Park and leaving her for dead. Tried as a juvenile, he was sent into adult custody at Rikers Island, “a notoriously violent prison from which many men never returned,” before being shifted in and out of other institutions. In 2002, following a jailhouse confession by the actual attacker, the convictions were overturned. Inside the system, taking a cue from Malcolm X, Salaam accepted the fact that “it’s often incumbent upon the person to educate him- or herself while inside.” He completed high school and earned an associate’s degree, building on his enrollment in the LaGuardia High School of Music and Art when he was only 12. “They have created cages in order to create animals so they’ll have an excuse to create more cages,” writes the author. “But we all have the power to blossom behind those bars.” Sadly, as he notes, whereas he had the support of a loving and attentive mother, many other imprisoned people have no social network. One of the Five, unable to find work and adjust to life outside, returned to prison. Punctuating his prose with memorable images (“Fear was playing Double Dutch with my mind”), Salaam denounces a system of injustice built on the backs of Black people, demonized as born criminals. Remarkably, though Donald Trump himself made his first foray into politics on the backs of the Five, the author mentions him by name just once in a book rich in self-knowledge and compassion. “As the alchemist of your life,” he writes, “you have control over the choices you make on this journey….But no matter what, you can be free.”

Warm, generous, and inspirational: a book for everyone.