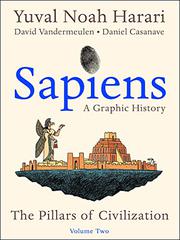 A Graphic History, Volume 2: The Pillars of Civilization

The second installment of the graphic adaptation of Harari’s bestselling 2014 book.

Harari, Vandermeulen, and Casanave pick up the human project at the very beginning of the agricultural revolution, advancing the narrative of human history via Casanave’s vibrant, expansive panels of artwork, many of which evoke early comic strips, and plenty of amusing, tongue-in-cheek dialogue. Our amiable guides from Volume 1—Yuval, Zoe, Professor Saraswati, Cindy and Bill (they are now farmers), Detective Lopez, and Dr. Fiction—return to lead us through the proceedings, while historical figures move in and out of the narrative to provide insightful, appealing commentary about farming, animal domestication, and other relevant topics regarding the agricultural revolution and where it has led us as a species. Kafka meanders through a few dozen pages, discoursing on the massive complexities of the human brain and memory retrieval, the proliferation of numbers and data, and, of course, the detriments of bureaucracy involved in storing, accessing, and controlling information. Harari and company have deep reservations about many of the consequences of our “achievements,” problems that have included sickness and disease, unmanageable population increase, and sheer drudgery. The proliferation of private property, a natural consequence of working the land, was undoubtedly momentous, but it also contributed to the rise of slavery, complex social hierarchies, the second-class citizenry of women and other marginalized groups, and widespread racism. Throughout, the authors seek to present a concise rendering of the full march of humankind and point out elements that are fictionalized, misrepresented, or exaggerated—and show how those elements have shaped human behavior, norms, and mores. The section on American slavery and its consequences into the present is particularly illuminating. Ultimately, balance in society is key to maintaining some semblance of order amid seemingly chaotic circumstances: “If people have faith in nothing, social order collapses, causing a lot of suffering….A big part of politics is about finding the right balance.”