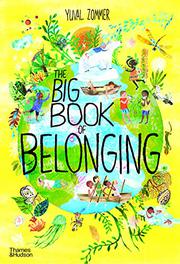 THE BIG BOOK OF BELONGING

Learn about our many connections to the natural world.

Double-page spreads of colorful natural scenes greet readers with four to six trivia facts grouped loosely within a theme. Some of the information is fairly vague (if lyrical); an autumn fact states that “berries ripen and mushrooms burst from the damp ground,” but that’s species- and location-specific. Other statements are oversimplified to the point of inaccuracy, as when readers are told, “Fava beans can send chemical messages to each other through their roots.” Technically, these plants are communicating via a symbiotic connection that exists among many species (not just fava beans) and a fungus in the soil. The inclusion of some statements is downright baffling, as in one that states, “Some people think the [Coriolis effect] happens in bath tubs!” Since scientists have stated for decades that there are too many variables in bathtub construction for this to be the case, why say that “some people think” so? There are no citations or bibliography, so caregivers and educators hoping to help curious readers learn more will have to scramble for additional information. A glossary of just six words and a seek-and-find game are pretty anemic additions.

Pretty and enthusiastic—but insubstantial despite its heft.