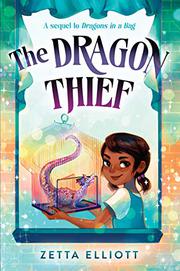 From the Dragons in a Bag series, volume 2

by Zetta Elliott ; illustrated by Geneva B

Jaxon and his friends deal with the fallout from the theft of one of the baby dragons in his charge.

As this sequel to Dragons in a Bag (2018) opens, Kavita, the titular dragon thief, introduces elderly Aunty to stolen baby dragon Mo. Thankfully, Aunty knows someone in Queens who can help return Mo to the realm of magic. Meanwhile, and in alternating first-person chapters, Jax is trying to find Kavi and Mo, as Mo’s siblings have grown ill as a result of the separation, as has Ma, Jax’s magical mentor and grandmother figure. Jax again teams up with his best friend and Kavi’s older brother, Vik. A third is added to their crew with “huge” Kenny, “the biggest kid in [their] class.” (Unfortunately, much is made of Kenny’s size, which feels gratuitous and unkind.) Eventually the trio finds Kavi, Aunty, and Mo, who’ve been abducted by a magical con artist. All’s well that ends well when Sis, the powerful guardian of the magic realm, shows up, but readers may wonder why the narrative decides to grapple with her choice not to intervene in injustice in our world. Her argument that human-caused problems are for humans to solve feels undeveloped, especially in the face of a massive injustice like the trans-Atlantic slave trade (mentioned during the climax and at no other point). Jax is black; Vik, Kavi, and Aunty are Indian American (though Aunty has African ancestry as well); and Kenny is white. The rest of the cast is diverse as well.

Despite missteps, this satisfying follow-up will leave readers hoping for more magical adventures with lovable Jax and company.