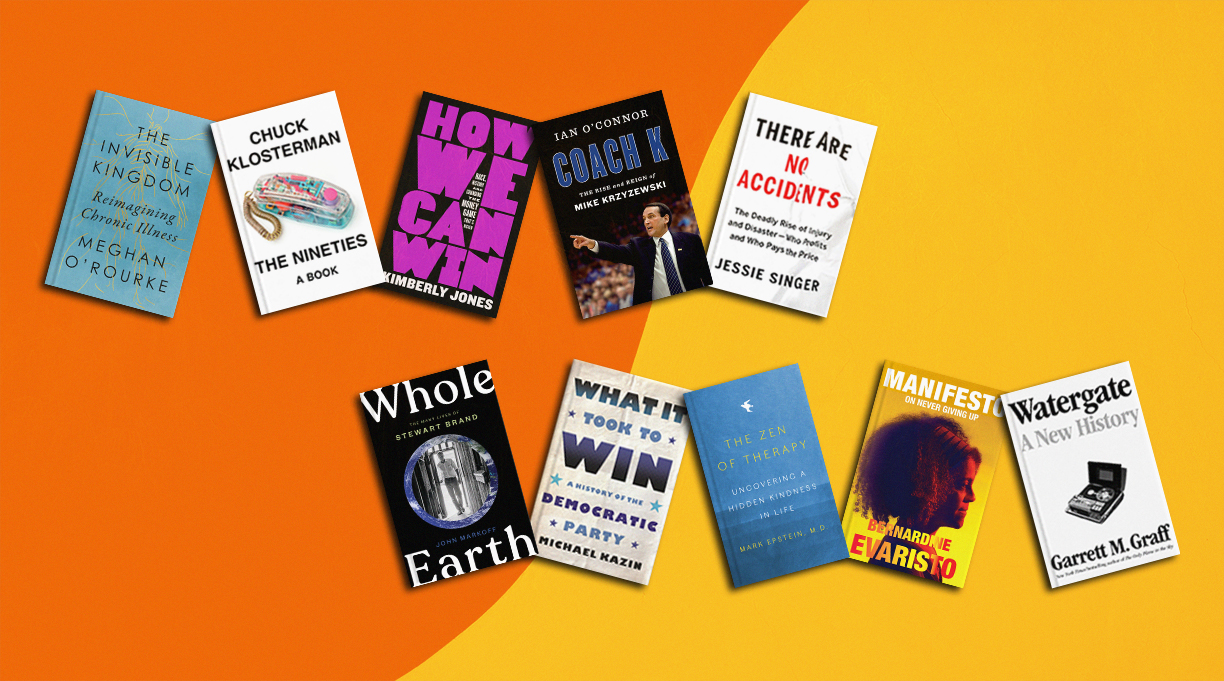 Background by Claudio Poggio on Unsplash

Welcome to 2022! Now that you’ve made it through the holiday season, it’s time to spend the next couple months in a blanket, reading books. I highly recommend any of these 10 books to kick off the new year. The books are listed by release date, and all quotes are from the Kirkus reviews.

The Zen of Therapy: Uncovering a Hidden Kindness in Life by Mark Epstein (Penguin Press, Jan. 11): “Empathetic and persuasive—one of the better books on psychotherapy and meditation in recent years.”

Manifesto: On Never Giving Up by Bernardine Evaristo (Grove, Jan. 18): “The award-winning author of Girl, Woman, Other generously shares her pathway to success in this nonfiction debut.…She lays bare the nuts and bolts of her writing process; pushes back against sexism, racism, and ageism; and imparts her hard-won wisdom unapologetically and with refreshing nuance.”

How We Can Win: Race, History and Chasing the Money Game That’s Rigged by Kimberly Jones (Henry Holt, Jan. 18): “A prominent Black activist and YA author delivers a damning, resounding study of the many ways in which fiscal equality is denied to non-White people in [America].…Demanding better, Jones provides a wise, measured look at the economic and social landscape of America.”

The Nineties: A Book by Chuck Klosterman (Penguin Press, Feb. 8): “Throughout the wide-ranging narrative—from technology and the rise of the internet to key trends in music, TV, and film; indelible moments in sports; and significant political moments—Klosterman takes pains to ensure that references are addressed in relation to their historical context rather than through the foggy and often inaccurate lens of memory.…A fascinating examination of a period still remembered by most, refreshingly free of unnecessary mythmaking.”

There Are No Accidents: The Deadly Rise of Injury and Disaster—Who Profits and Who Pays the Price by Jessie Singer (Simon and Schuster, Feb. 8): “The rate of deaths attributed to accident in the U.S. is appalling—and, but for lust for profit, mostly avoidable.…An eye-opening, urgent book that demands an end to inequality as a matter of life and death.”

Watergate: A New History by Garrett M. Graff (Avid Reader Press, Feb. 15): “The text is a brisk, riveting, compulsively readable, comprehensive, up-to-date narrative of the entire tangled affair, and it’s hard to imagine it better told.…Now the best and fullest account of the Watergate crisis, one unlikely to be surpassed anytime soon.”

Coach K: The Rise and Reign of Mike Krzyzewski by Ian O’Connor (Mariner Books, Feb. 22): “A full-court look at NCAA men’s basketball’s all-time winningest coach on the eve of his retirement.…A sharpshooting account worthy of a champion.”

What It Took To Win: A History of the Democratic Party by Michael Kazin (Farrar, Straus and Giroux, March 1): “Like Heather Cox Richardson’s analogous history of the Republican Party, To Make Men Free, Kazin applies tough scrutiny and due criticism to an institution that, as early as the 1840s, was unparalleled in its electoral and institutional innovations and acceptance of popular politics.…This should be today’s go-to book on its subject.”

The Invisible Kingdom: Reimagining Chronic Illness by Meghan O’Rourke (Riverhead, March 1): “Tormented for years by enervating symptoms, the author spent most of her 30s dealing with—and trying to understand—chronic illness.…Emotionally compelling and intellectually rich, particularly for those with a personal connection to the issue.”

Whole Earth: The Many Lives of Stewart Brand by John Markoff (Penguin Press, March 22): “Tech journalist Markoff, who has covered Silicon Valley since 1977, delivers an admiring portrait of the ‘quixotic intellectual troubadour’ Stewart Brand.…A sturdy, readable study of a fellow who’s had considerable press devoted to him—but who can still surprise.”