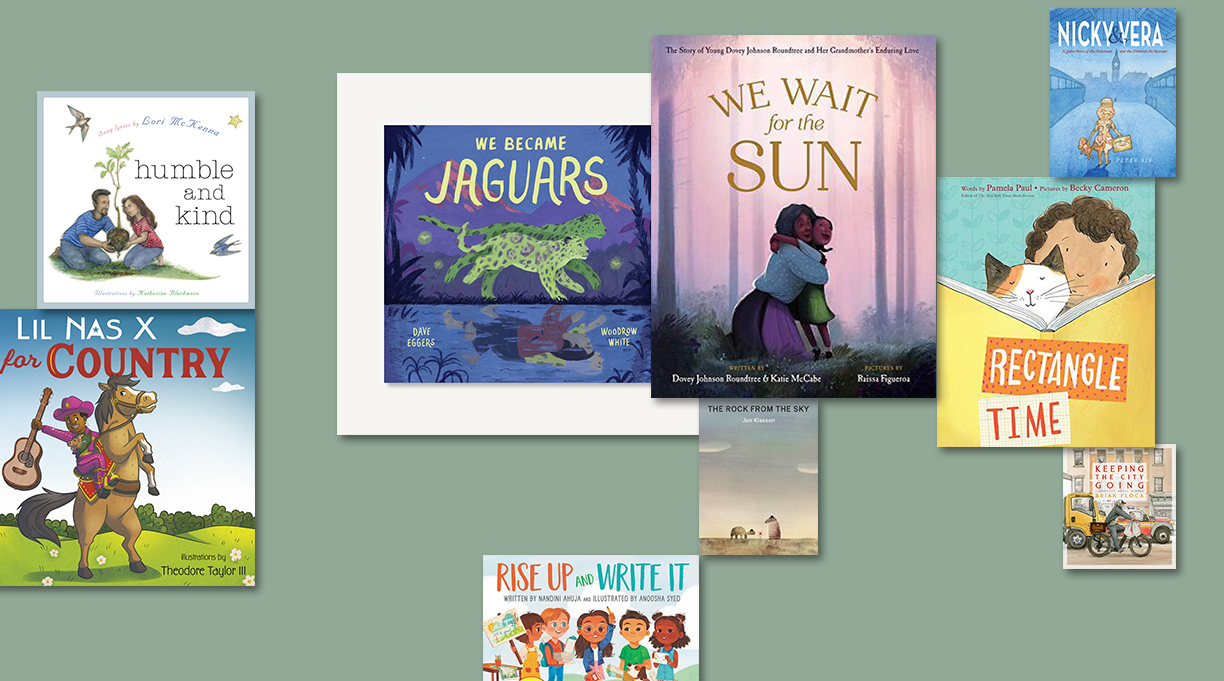 Nandini Ahuja and Anoosha Syed give young readers an interactive introduction to activism with Rise Up and Write It (HarperFestival, Jan. 5). When she notices the disappearance of butterflies from the neighborhood, little Indian American Farah Patel starts to organize to establish a community garden—but she faces opposition. With removable letters, postcards, and posters, her story teaches young readers the steps necessary to think globally and act locally.

The viral country-trap hit “Old Town Road” was arguably the song of 2019. Lil Nas X trades the mic for the alphabet with C Is for Country (Random House, Jan. 5), an ebullient abecedary that depicts a day in the life of the musician as a child on his family’s ranch. In Theodore Taylor III’s oh-so-hip cartoon illustrations, the buoyant protagonist sports all the bling his fans expect, even as he rides pony Panini through a bucolic countryside before returning to the embrace of his loving Black family.

Civil rights attorney Dovey Johnson Roundtree chronicled her life in her memoir for adults, Mighty Justice, written with Katie McCabe. The new picture book We Wait for the Sun (Roaring Brook, Jan. 5) expands an early Jim Crow–era episode from the memoir into a stand-alone story illustrated by Raissa Figueroa. In it, little Dovey Mae and Grandma Rachel rise in the predawn blackness to join other Black women and girls in picking berries—safe in the early hour, safe together.

With Nicky and Vera (Norton Young Readers, Jan. 26), Czech American author/illustrator Peter Sís delves into his home country’s recent history to unearth a little-known episode from the Holocaust. In 1938, Nicholas Winton, a 29-year-old Englishman of German Jewish heritage, was visiting Prague just after the Nazis invaded Czechoslovakia’s Sudetenland, bringing the looming war closer; Veruška “Vera” Diamantova was a 10-year-old Czech Jewish girl, one of hundreds of children Winton saved by arranging their evacuation from Czechoslovakia to England in a sort of one-man Kindertransport. This is their story.

New York Times Book Review editor Pamela Paul teams up with illustrator Becky Cameron for Rectangle Time (Philomel, Feb. 16), a cat’s-eye view of the lasting impact of family reading on a child’s habits. From a cozy shared reading of a picture-book rectangle (The Snowy Day) to a rapt solo reading of a much smaller one (The Hobbit), the narrating feline observes a boy grow up loving books. It’s effectively a picture-book version of How To Raise a Reader, Paul’s collaboration for adults with former NYTBR colleague Maria Russo.

In 2016, Tim McGraw had a hit with country music artist Lori McKenna’s lyrical message to her children about the values and practices that count in life. Now Humble and Kind (Akashic, March 2) comes to picture-book readers with illustrations by Katherine Blackmore as part of the publisher’s LyricPop series. In its pages, an interracial family with a Black father and a White mother enjoys bucolic summer days, building a treehouse when it’s sunny, making a blanket fort when it rains, and always loving one another.

Paris Rosenthal, daughter of the late, beloved Amy Krouse Rosenthal, has been continuing as solo author the series she and her mother began with Dear Girl,. Also illustrated by Holly Hatam, the fourth will be out this spring. As the subtitle makes clear, Dear Teacher,: A Celebration of People Who Inspire Us (Harper/HarperCollins, March 16) is a love letter to teachers, coaches, and the other mentors who provide guidance and inspiration in our lives.

The ever busy Dave Eggers returns to picture books with We Became Jaguars (Chronicle Books, March 30), illustrated by Woodrow White. A visit from Grandma turns into a fantastic adventure when mom and dad go out and she shows her grandson how to become a jaguar. The feline pair prowls through jungle, savanna, and mountain landscapes before stopping to sip from a stream, where their pale human faces reflect back at them. At last they return to quotidian human life—or do they?

Jon Klassen won the Caldecott for This Is Not My Hat, his tale of a hat-stealing fish. He is back at his most deadpan with The Rock From the Sky (Candlewick, April 13) and another hat-wearing animal cast: an armadillo, a tortoise, and a diamondback rattlesnake. No one steals anything, but there are indeed rocks. The three animal friends bicker and hang out together in a plot worthy of Samuel Becket that will leave readers wondering just which one is the titular rock.

In Keeping the City Going (Caitlyn Dlouhy/Atheneum, April 27), Caldecott Medalist Brian Floca both chronicles the spring 2020 Covid-19 lockdown and celebrates the essential workers who continued going out to their jobs so that everyone else could stay in. The eerily empty streets of New York City are populated here by bicyclists delivering takeout dinners, truck drivers restocking groceries, bus drivers, sanitation crews, utility workers, emergency workers, medical personnel, and more: the people who kept the city going.