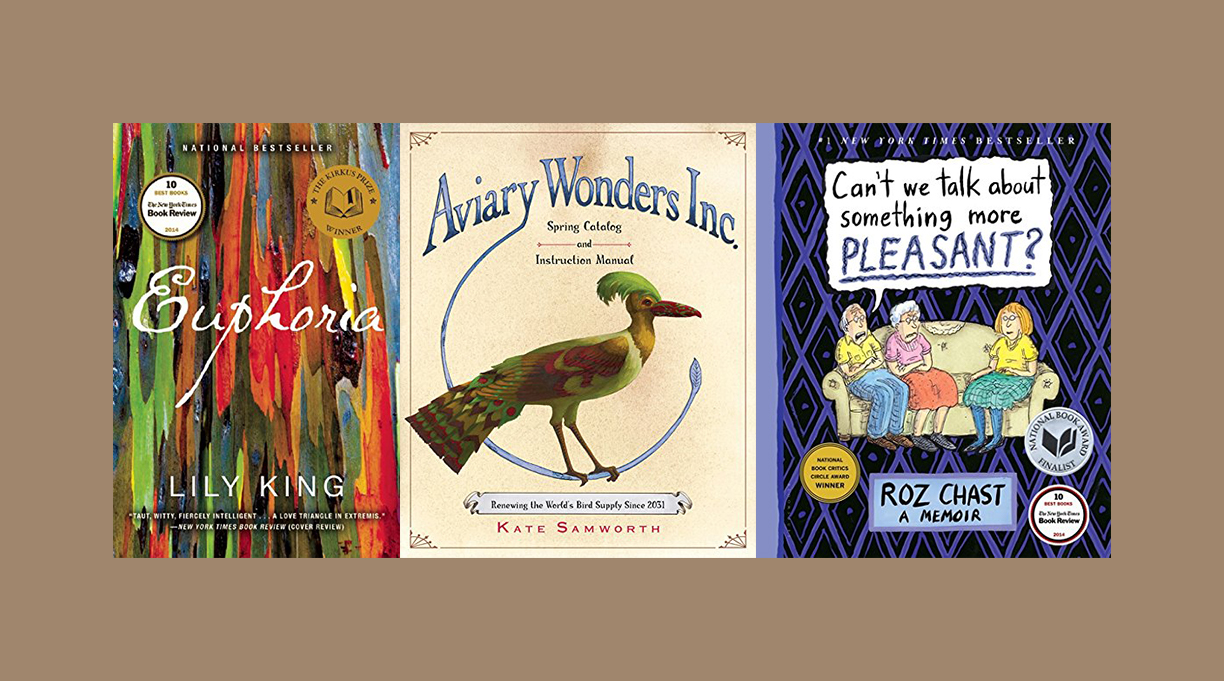 On Thursday, October 23rd, the 2014 Kirkus Prize finalists, judges, Kirkus Reviews staff and their guests gathered at the home of Lynn and Tom Meredith, the penthouse of the Four Seasons Residences in Austin, Texas, to learn which of the Prize’s finalists would become the three winners of the Prize (and each of them the recipient of $50,000). The Prize’s categories encompass fiction, nonfiction and young readers’ literature.

Congratulations to the winner of the 2014 Kirkus Prize for Young Readers’ Literature, Aviary Wonders Inc.: Spring Catalog and Instruction Manual by Kate Samworth! Published by Clarion, Aviary Wonders Inc. is Samworth’s debut book. She has studied and taught painting at the New Orleans Academy of Fine Art. Mode

led on mail order catalogues of the past and present, Aviary Wonders Inc. presents solid informational content and a thoughtful environmental warning—all leavened with snarky humor—in stunning visual spreads. Bird species are going extinct at a great rate, but why worry? With this splendid catalogue of customized beaks, wings and other bird parts, readers can assemble glorious avian creations of their very own. To the right is Kate Samworth after learning that her picture book Aviary Wonders, Inc. is the winner of the 2014 Kirkus Prize for Young Readers’ Literature.

Samworth tears up holding her trophy as senior Indie editor Karen Schechner and editor in chief Claiborne Smith look on.

Judges’ statement: “Aviary Wonders Inc. is a picture book that widens the definition of the genre. While truly a picture book, it was created for readers aged 10 and up with well-developed sensibilities and senses of humor. Confronting environmental issues in a clever and whimsical way, it is original, highly unexpected, beautiful, and thought-provoking. Aviary Wonders Inc. is by far one of the most creative books we have ever encountered.”

The winner of the 2014 Kirkus Prize for Nonfiction is Can’t We Talk About Something More Pleasant? by Roz Chast, published by Bloomsbury. The graphic memoir is a revelatory, groundbreaking, and often hilarious memoir by the New Yorker cartoonist on helping her parents through their old age.

Chast couldn’t attend the ceremony because she was on book tour, so Bloomsbury sales rep Gillian Redfearn attended on her behalf. Below, Redfearn reads a statement from Chast as Kirkus Reviews publisher Marc Winkelman and editor in chief Claiborne Smith look on.

Judges’ statement: “Can’t We Talk About Something More Pleasant? is a vital, significant wonder. Chast ingeniously combines cartoons, family photos, sketches, documents and text to explore a profoundly human issue: the death of one’s parents. In the hands of an author whose facility in two mediums—illustration and prose—is unparalleled, Can’t We Talk About Something More Pleasant? encourages anyone who reads it to face the grim and ridiculous reality of the human condition in all its heartbreaking beauty. One can’t help but finish this book with a sense of gratitude that Roz Chast has shared her memoir with the world. It is as imperative as it is moving.”

The 2014 Kirkus Prize for Fiction was awarded to Euphoria by Lily King, published by Atlantic Monthly Press. Set in Papua, New Guinea in the 1930s, Euphoria is a brilliant, astonishing and deeply moving novel inspired by the life of Margaret Mead and her passionate entanglement with two fellow anthropologists.

Judges’ statement: “Lily King has written the fiction book of the year. Euphoria stands out for its perfect construction, its economy and originality, and its fearlessness. This lushly imagined novel offers a thrilling exploration of the interplay between character and culture, between the darkness of humanity and the tenderness of the huma

n heart. It’s going to be a classic.” To the left, King accepts the Prize as chief operating officer Meg Kuehn looks on.

Fiction finalists: The Blazing World by Siri Hustvedt (Simon Schuster); All Our Names by Dinaw Mengestu (Knopf); Florence Gordon by Brian Morton (Houghton Mifflin); The Remedy for Love by Bill Roorbach (Algonquin Books); The Paying Guests by Sarah Waters (Riverhead). Below are the winners of the 2014 Kirkus Prizes with their trophies: Kate Samworth, Lily King and Roz Chast (represented by Gillian Redfearn).