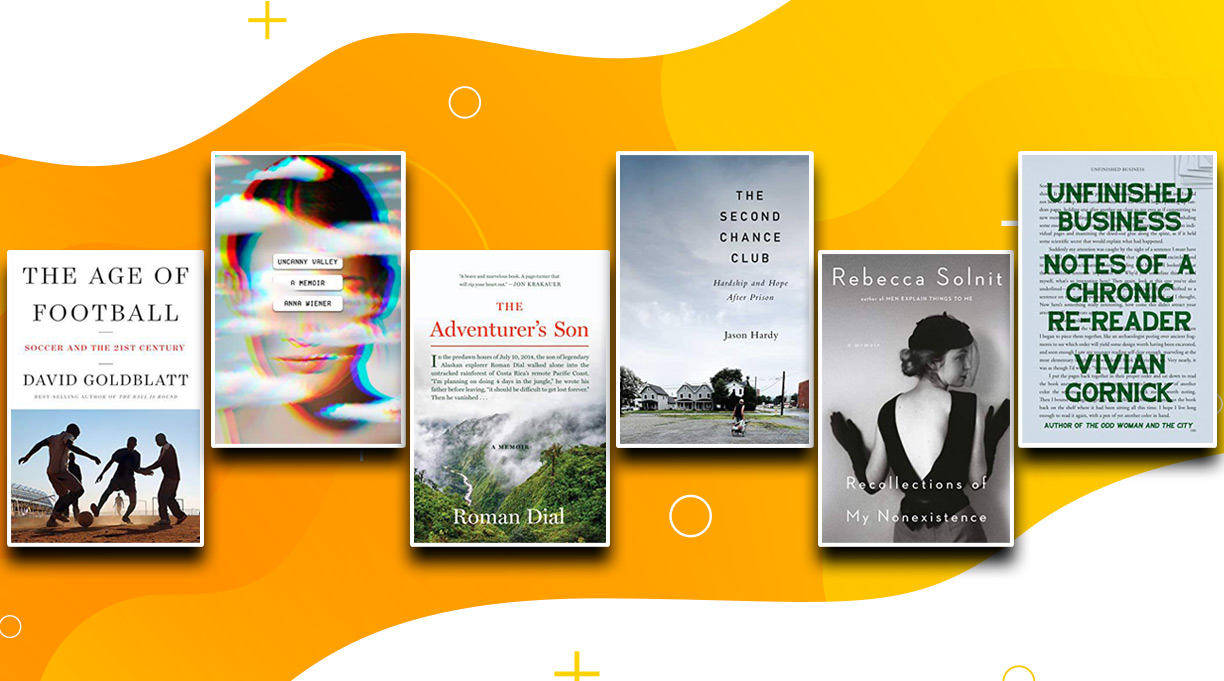 Now that the holidays are over and the new year is here, it’s time to look ahead. The first few months of 2020 are packed with significant books. I wanted to highlight six outstanding ones that represent a variety of subjects.

The Adventurer’s Son by Roman Dial (William Morrow, Feb. 18): In this thrilling adventure/detective story, Dial, an Alaska-based biologist and ecologist, writes about his journey to discover what happened to his son, who disappeared in the Costa Rican jungle in 2014. The suspense rises as he sifts through the clues and struggles to track his son’s last moments in the wilderness. Our reviewer writes, “Fusing personal history with elegy and adventure, this arresting narrative of every parent's worst fear begins with the author’s background and then recounts the Dial family’s many exciting excursions….A poignant, highly moving memoir of tragic circumstances and a lifelong love of exploring.”

The Age of Football by David Goldblatt (W.W. Norton, Feb. 18): This magisterial study of the beautiful game is an absolute must-have for every soccer fan. In a globe-spanning narrative, Goldblatt gets to the heart of why the world’s most popular sport is so significant—and not just on the field. The author also explores the political and cultural impact of the game and how it has become intertwined with society in so many countries around the world. As our reviewer writes, “There’s no corner of the globe that Goldblatt doesn’t explore, and his book updates and overshadows Franklin Foer’s How Soccer Explains the World (2004)….Superb: Essential reading not just for fans of the sport, but also for students of geopolitics.”

Unfinished Business by Vivian Gornick (Farrar, Straus and Giroux, Feb. 11): One of the literary world’s most incisive critics returns with an appreciation of the power of rereading. As she writes, revisiting significant works of literature over the course of decades is an exercise in perspective and how taste, viewpoints, and context change during a lifetime. Our reviewer nails it in the starred review: “Literature knows few champions as ardent and insightful—or as uncompromising—as Gornick, which is to readers’ good fortune.”

The Second Chance Club by Jason Hardy (Simon & Schuster, Feb. 11): This deep dive into the life of a parole officer couldn’t be timelier, as the U.S. deals with an ongoing incarceration epidemic. Hardy insightfully and empathetically chronicles the plight of seven of his clients and how the criminal justice system has, in ways both major and minor, failed them all. “Throughout,” writes our reviewer, “the author is refreshingly candid with readers, who will realize that his ultimate goal is to prevent his clients from continued lives of crime, violence, or even death….A powerful, necessary book with revelatory passages on nearly every page.”

Recollections of My Nonexistence by Rebecca Solnit (Viking, March 10): Solnit proves yet again that she is incapable of writing a less-than-revelatory book. In this memoir, the author recounts her early adulthood in San Francisco, when she lived in a tiny yet beloved apartment and found her voice as an artist. She ended up living there for 25 years and, for much of that time, “felt silenced by a society that effaced women, circumscribed their freedom through harassment and violence, and insisted that they learn ‘deferential limits.’ So she became expert at the ‘art of nonexistence, since existence was so perilous.’ ” The book, “a perceptive, radiant portrait of a writer of indelible consequence,” effectively shows us the development of this unique talent.

Uncanny Valley by Anna Wiener (MCD/Farrar, Straus and Giroux, Jan. 14): In a Silicon Valley exposé that is “equal parts bildungsroman and insider report,” Wiener “reveals not just excesses of the tech-startup landscape, but also the Faustian bargains and hidden political agendas embedded in the so-called ‘inspiration culture’ underlying a too-powerful industry.”