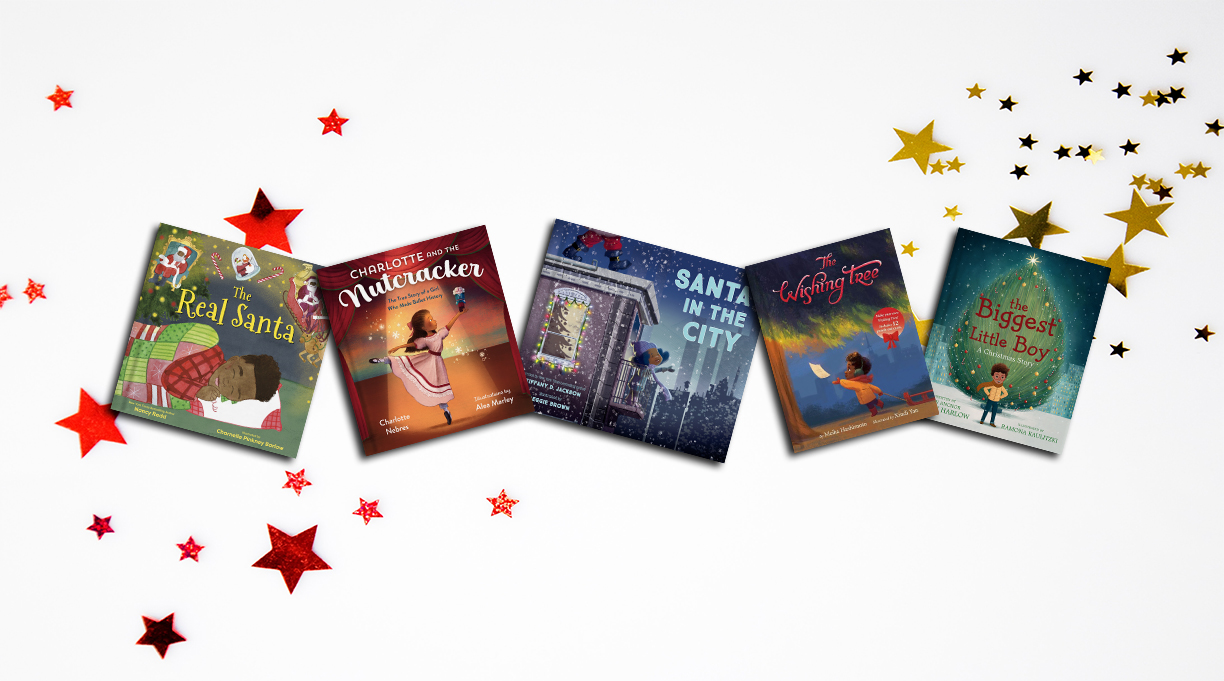 Background by Markus Spiske on Unsplash

For children, Christmas is a cosmic event. Between the mystery of a God-baby in a manger, visitations from magical Yuletide figures (Santa Claus, Old Man Bayka, La Befana…the list goes on), and the liminal landscapes we enter through the mist of nostalgia (inevitable at year’s end, even for children), Christmastime can truly feel like a season when the veils between worlds thin. It’s the only time of the year when the whole planet agrees to dream together, and anything feels possible, particularly for children, who dwell comfortably in reverie. “The child’s vision is grand and beautiful,” philosopher Gaston Bachelard once wrote. “The dreaming child knows the cosmic reverie which unites us to the world.”

A good holiday picture book has a duty to affirm that vision of a world in which we’re all united by the shared magic of belief and possibility. Here are five that rise to the occasion.

The Real Santa by Nancy Redd, illustrated by Charnelle Pinkey Barlow (Random House, Oct. 5): A young Black boy and his family prepare for Santa’s visit. He believes that Santa might look like him because his parents and grandparents have decked their home with figurines and Christmas tree ornaments depicting Santa as Black. Both his belief in Santa and in the possibility of a world where he belongs are what imbue Christmas Eve with magic as he tries to stay awake to see the real Saint Nick.

Santa in the City by Tiffany D. Jackson, illustrated by Reggie Brown (Dial Books, Oct. 5): Deja, a Black, city-dwelling Jamaican American girl, is beginning to lose her belief in Santa. Thanks to cynical classmates, she begins to notice all the ways in which the conventions of the Kris Kringle legend don’t work in an urban setting. Young readers grappling with similar doubts may still have them after reading this book, but its removal of limits on the Santa Claus narrative (including illustrations portraying Santa as Black) is enough to widen the doors of possibility.

Charlotte and the Nutcracker: The True Story of a Girl Who Made Ballet History by Charlotte Nebres with Sarah Warren, illustrated by Alea Marley (Random House, Dec. 21): Twelve-year-old Trinidadian Filipina American author Nebres tells her story of becoming the first Black girl in the history of the New York City Ballet to play Marie, the young heroine of Balanchine’s enchanting Christmas classic, The Nutcracker. Young readers will come away knowing that there is year-round magic in doing what we love and that anything is possible when we work hard and dream big.

The Biggest Little Boy: A Christmas Story by Poppy Harlow, illustrated by Ramona Kaulitzki (Viking, Oct. 5): A young, biracial (half Black, half White) boy with a taste for the towering and the titanic dreams of getting the city’s biggest Christmas tree. Walking past the Christmas tree market every day, he searches for the right tree, but none are ever big enough for him. His dream abruptly changes when he comes across a tree that’s exactly his size. The story’s message about the equal value of having big dreams and more manageable ones is no small bit of wisdom, especially during the holidays with so much bigger-is-better seasonal fare aimed at consumers.

The Wishing Tree by Meika Hashimoto, illustrated by Xindi Yan (Harper/HarperCollins, Sept. 21): Theo, a young Black boy, is worried because Christmas is near and his town hasn’t gotten into the holiday spirit. After sending a dispatch to Santa expressing his wish that everyone could see the holiday’s magic, he discovers a pine tree whose branches mysteriously drop handwritten letters with instructions on how to awaken Christmas wonder in his community, which he succeeds in doing—a Christmas miracle.