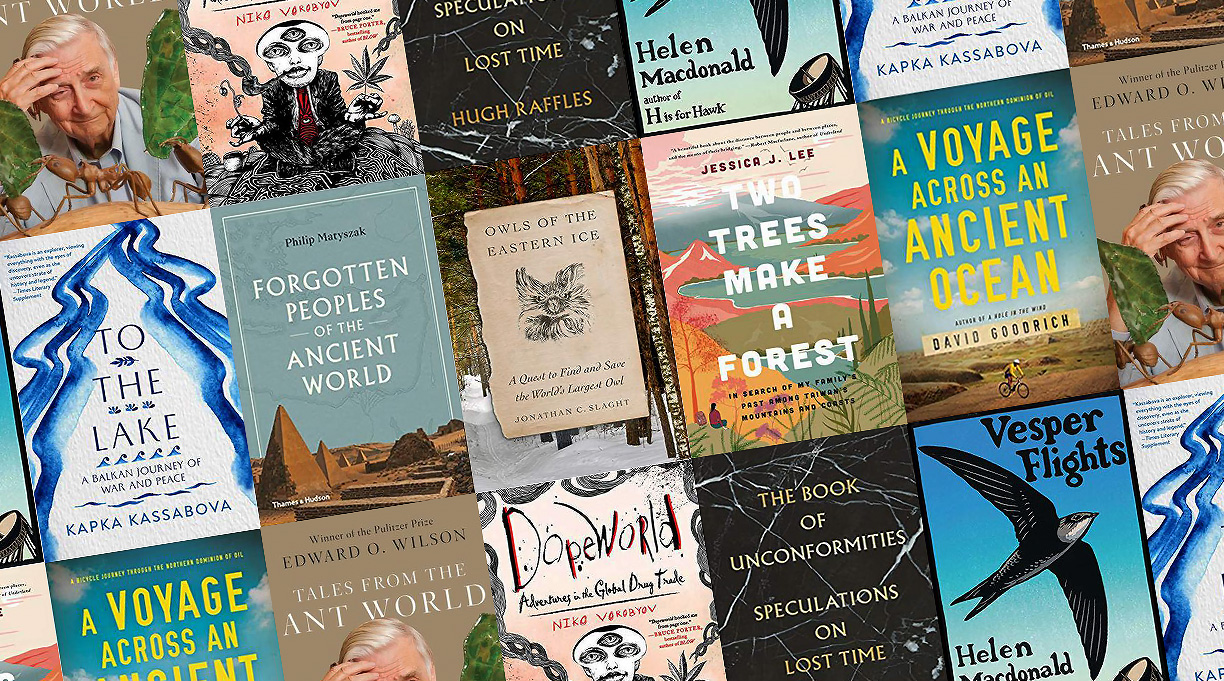 While it’s always satisfying to read about places I have visited, reliving my experiences and indulging my sizable nostalgic streak, I find greater fulfillment in books about areas of the world that are completely unfamiliar to me. Because this August provides a bounty of such books, I wanted to recommend as many as I could; each entry notes the place in question and quotes from the review.

A Voyage Across an Ancient Ocean by David Goodrich (Pegasus, Aug. 4): “Goodrich chronicles his [1,100-mile] bicycle ride from Alberta, Canada, to the northern plains of the U.S., intent on seeing where carbon comes out of the ground.”

To the Lake by Kapka Kassabova (Graywolf, Aug. 4): In this worthy follow-up to the award-winning Border, Bulgarian writer Kassabova explores the “Balkan region around lakes Ohrid and Prespa, encompassing North Macedonia and Albania….Through the many people she met—many, in fact, relatives—Kassabova chronicles the region’s history and culture, evoking songs, folktales, poetry, myths, and superstitions….A haunting, captivating memoir of homecoming.”

Two Trees Make a Forest by Jessica J. Lee (Catapult, Aug. 4): Lee, a Berlin-based British Canadian Taiwanese author, excavates her family history across Taiwan. “This elegiac book, which smoothly incorporates historical and travel threads, was born from the desire to embrace her heritage. With a doctorate in environmental history and an impressive grasp of botany and geology, Lee takes readers on a fascinating tour of the island and its past.”

Vesper Flights by Helen Macdonald (Grove, Aug. 25): The award-winning author of H Is for Hawk delivers a series of enchanting nature essays, covering territory from Hungary to New York to the pastoral English countryside. We called it “exemplary writing about the intersection of the animal and human worlds.”

Forgotten Peoples of the Ancient World by Philip Matyszak (Thames Hudson, Aug. 18): “Lightly worn but rich scholarship” informs this fascinating journey into the ancient world, encompassing civilizations in Mesopotamia, Egypt, Israel, and elsewhere: “Each entry for peoples ranging in time from deep prehistory to the early Middle Ages includes handsome illustrations and maps, and the author’s text is accessible, sometimes playful, and never dumbed down.”

The Book of Unconformities by Hugh Raffles (Pantheon, Aug. 25): In this geological adventure through Greenland, Iceland, the Outer Hebrides, and the Svalbard archipelago, among other far-flung locations, the author “uses stones as jumping-off points to create poetic portraits of various times and places….The text shimmers with rangy curiosity, precise pictorial descriptions, well-narrated history, a sympathetic eye for the natural world, and a deft, light scholarly touch….As panoptic and sparkling as the crystals contained in many of the author’s objects of study.”

Owls of the Eastern Ice by Jonathan C. Slaght (Farrar, Straus and Giroux, Aug. 4): Chronicling his “travels through remote Russian landscapes…Slaght, the Russia and Northeast Asian Coordinator for the Wildlife Conservation Society, grips readers with vivid language and tight storytelling. His many months trekking through the icy wilderness to find and track rare fish owls—the largest owl on Earth—inform a narrative that blends field research, personal journey, and adventure writing.”

Dopeworld by Niko Vorobyov (St. Martin’s, Aug. 18): This “entertaining excursion into the narcotics trade by a one-time practitioner” will appeal to anyone interested in the catastrophic failure of the ongoing war on drugs, but it also serves as a kind of a dope-trade travelogue, with stops in 15 countries, including Russia, China, Colombia, and Afghanistan.

Tales From the Ant World by Edward O. Wilson (Liveright/Norton, Aug. 25): “The world-renowned ant expert cleans out his desk, which—no surprise—contains many gems.” Travel with him from Brazil to New Guinea and numerous teeming places in between.