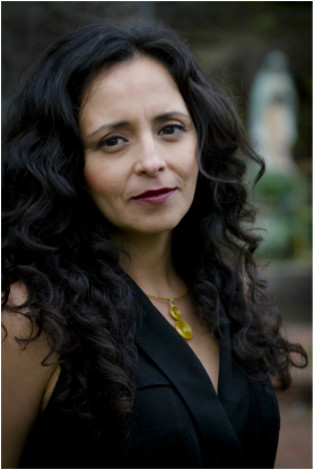 When Aida Salazar’s daughter hit puberty, the author knew she wanted to celebrate her child’s coming-of-age; the question was how. They’d been attending moon ceremonies for years, and both liked the idea of having one, but there wasn’t much information available about Indigenous American traditions. Based on what information she could find, Salazar designed a ceremony that honors Xicana traditions as well as celebrating the female body and its connection to the moon and to the Earth. “The metaphor of the flower and the blossom and the metaphor of the water and the cleansing, all of these I think are beautiful ways to tell a story…and go a little bit deeper than just, Well, you blossomed or, Well, you’ve come of age,” she says.

The moon ceremony is the focal point of Salazar’s new novel in verse, The Moon Within. Eleven-year-old Celi knows that she’ll get her first period but insists that she doesn’t want her mother to celebrate it with a public ceremony. She struggles with uncertainty about her changing body, her first attraction to a boy, and how to support her friend coming out as genderfluid,but she ultimately learns to accept herself, her heritage, and her beliefs.

“We live in such a puritanical society that women’s menstruation, breastfeeding, women’s bodies are seen negatively or hypersexualized,” Salazar says, “and so I wanted to reframe that conversation and wanted to make sure that we allow children to have this opportunity for exploration and for wonder and for acceptance of their own beauty.” The Moon Within is one of the few children’s books to straightforwardly discuss the biological and emotional changes that come with puberty and how fraught that can be for a young girl.

Feminist issues have always shaped Salazar’s work, first as an activist and now as a writer, but her initial inspiration for writing was more personal. When she was just 13, her elder sister committed suicide. “I took to writing because it was the only thing that helped to kind of unravel the grief and uncertainty that I felt,” she says. She started with poetry but explored fiction and nonfiction as well.

It wasn’t until she had her own kids that she became interested in books for kids. The whole family loved to read, and they would check out dozens of books from the library every week. Unfortunately, those books all had one thing in common: They lacked any characters who resembled Salazar’s family. Looking at the dismal state of Latinx representation, Salazar felt she could add a valuable perspective to children’s literature. “I feel like it’s a deeply political act of resistance,” she says. “When children see themselves reflected with dignity and in all of their humanity, that’s transformational.”

Because of her background in poetry, Salazar found herself especially drawn to the novels in verse that she read with her kids. “The ones in verse were the ones that really struck me,” she says. “They were the ones that stayed with me.” Writing in verse allowed her all of the tools of poetry, from metaphor to alliteration to white space, while still constructing a compelling narrative.

Some of Salazar’s activist friends have expressed confusion over her pivot to writing for kids, but she believes it’s an extremely fruitful method for effecting social change. “When you write for children, you create the biggest impact,” she says, “because those are lessons that they are taking with them into their life.”