The Inventions That Changed Us

Author Ainissa Ramirez, self-avowed “science evangelist,” fell in love with the field early and deeply. “I was one of those kids with a chemistry kit, doing experiments,” she says. She became obsessed with the educational science show 3-2-1 Contact that aired on PBS in the 1980s. “I saw this little African American girl who was part of the Bloodhound Gang [a segment involving junior ‘detectives’ solving mysteries using science] and I asked my mom, ‘What is she doing?’ She was a black woman using her brain. I rarely saw myself on television and that put me on the path to science.”

Ramirez’s debut book, The Alchemy of Us: How Humans and Matter Transformed One Another (MIT Press, April 7), aims to bridge what she sees as an unnecessary separation between humans and science. “The separation exists because of the way scientists typically present to people; we don’t need to always be punching people in the face with science!” Her antidote consists of eight beautifully rendered portraits of inventions that have altered human experience—including lightbulbs, labware, and silicon chips—with a focus on the historical figures often overlooked in the history of science, including women and people of color. “I couldn’t write a book where I am not reflected,” Ramirez says. 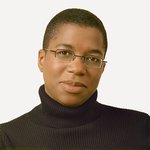 Ramirez, 51, first studied science at Brown University before going on to Stanford University for her Ph.D. in materials science and engineering. (“My mom doesn’t even know what that means,” she jokes about her chosen field. “Now that there is a book, she just says I am a journalist and writer.”) She has worked as a scientist at BellLabs, taught at Yale University, is a TED speaker, and an inventor in her own right, with six patents to her name. Yet her journey in science has not been easy. “I know now why that seed needed to be planted early,” Ramirez says. “It needed deep roots because there are so many barriers to becoming a scientist.”

When she first began working on The Alchemy of Us five years ago, she just planned to write a standard science book: Here are the facts, here’s how it happens. But the 2016 presidential election and subsequent social upheaval changed the way she considered well-worn stories such as that of “lightning man” Samuel Morse, inventor of the telegraph and Morse code. “When I found out this guy thought slavery was ‘a divine arrangement,’ I thought—people admire you, and I need to let people know this.”

Often, research led Ramirez to a hidden gem, as in the case of Ruth Belville, whose story opens the book’s first chapter, “Interact.” “I found this one sentence in a thick library book: ‘…and there was a lady who used to sell time.’ And I’d go, what? Hold up! I need to find out all I can about this Ruth lady.” Ramirez ultimately used Ruth to tell the human side of timekeeping. “I wanted to make sure that people who have been eclipsed by ‘geniuses’ get their moment, too.”

In a chapter titled “Capture,” Ramirez traces the technology of color Polaroid film as well as the company’s little-known involvement in supporting apartheid in South Africa in the 1960s and ’70s. “I felt heartbroken because I had loved Polaroid so much as a kid,” Ramirez says. She met with activist and former Polaroid employee Caroline Hunter, going together to Hunter’s old workplace in Cambridge, Massachusetts, where she had been harassed and fired for starting the Polaroid Revolutionary Worker Movement in opposition to Polaroid’s production of passbook photos used to identify and discriminate against black South Africans.“That was an incredibly hard story to write, but I thought, if I could write it as beautifully as I could, then people will be willing to read it and learn from it and actually see it.”

During her research, Ramirez learned a lot about science but also about herself. “Writing this book used both sides of my brain,” Ramirez says, since she had to look at the research as both a scientist and a writer. “The person who started this book and the person who finished this book have the same DNA but are different people,” she says. “That’s the true alchemy.”

Kelly McMasters is the co-editor of This Is the Place: Women Writing About Home and author of Welcome to Shirley: A Memoir From an Atomic Town.