Actor Ali Stroker Soars With ‘The Chance To Fly’ 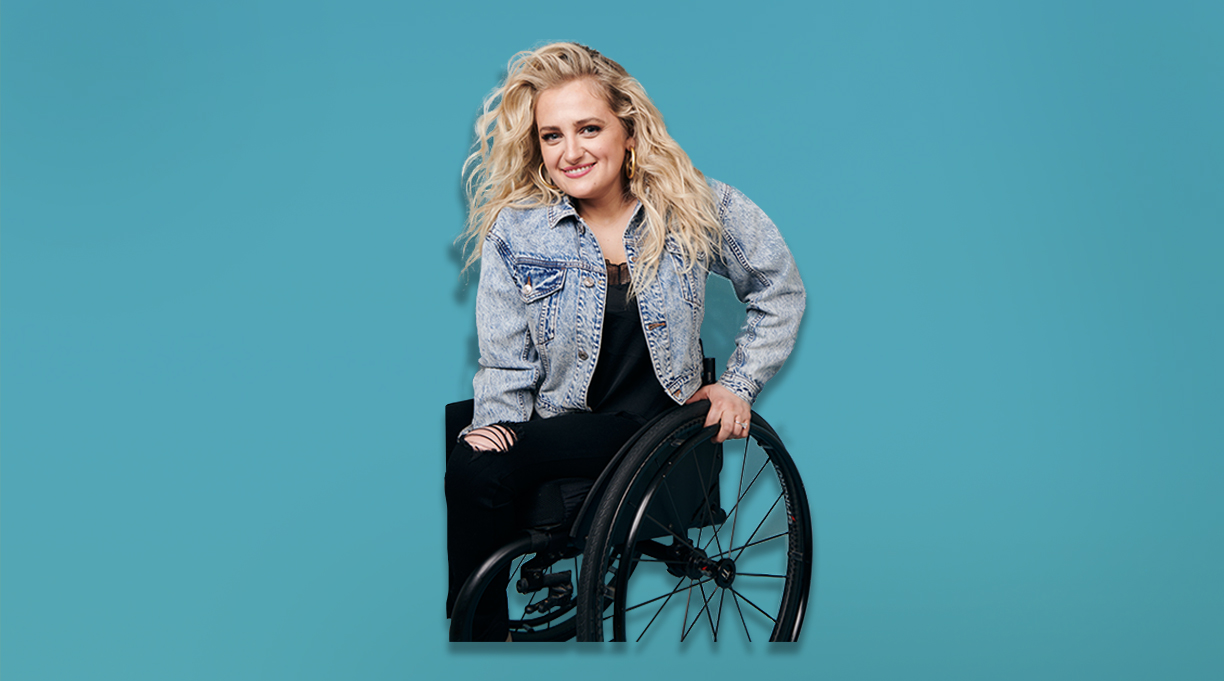 Ali Stroker’s career has always been about firsts. The actor first came to national prominence when she appeared on the talent search series The Glee Project and later was cast as Betty Pillsbury on Glee in 2013. Two years later, she became the first actor who uses a wheelchair to appear on a Broadway stage when she played Anna in the 2015 revival of Spring Awakening. She then became the first person with a disability to win a Tony Award for her role in the critically acclaimed 2018 production of Oklahoma!

But for all of these milestones, Stroker had to face major challenges as a performer who’s been paralyzed from the chest down since the age of 2, and she channeled some of these experiences into The Chance To Fly (Amulet/Abrams, April 13), about a 14-year-old named Nat who defies her parents’ wishes and auditions for a children’s production of Wicked. Nat, who’s partly based on Stroker, delves into the theater world and meets supportive new friends but also has to get past limitations others put on her as well as her own insecurities. Stroker talked to Kirkus by phone about what everyone can learn from Nat’s story, whether or not they have a disability, and about the joy of infusing her theater geekery into this middle-grade debut. The conversation has been edited for length and clarity.

How did The Chance To Fly come to be?

Well, I had always dreamed of writing a book, but since I’m primarily a performer, I didn’t know where to begin. Then, two years ago, Stacy Davidowitz, the co-writer on the book, came to me, and she was thinking about creating a character in a wheelchair for one of her books, and she wanted to interview me. In that moment, I asked, “What if I wrote it with you? And what if this character had her own book?” And she was like, “Are you kidding me? I would love that.” So that was the beginning of The Chance To Fly.

From that point, how did the rest of the character of Nat come to you?

Nat is a perfect combination of me and Stacy. I knew that I wanted to base a lot of her on me, but it was also really important as an actress to create a character, someone who was not just exactly Ali. Plus, both Stacy and I grew up doing theater, so a lot of the scenarios and situations that Nat finds herself in are based on real things that have happened.

One of the most fascinating aspects of the book is Nat’s having to contend with all the parts of theater that weren’t necessarily built from the beginning to include people with disabilities. Were those based on your real experiences?

Yes, that was a part of the book that was really important to me to include. People know the highlights of my career and all the wonderful things that have happened, but there have also been really, really challenging parts that have created who I am today.

Specifically, around choreography—I’ve had numerous situations growing up and in school, where people just assumed that I couldn’t dance. I always felt so strongly about being a dancer, and I was like, “Listen, I don’t dance like everybody else, but I dance.” I move, and I have a movement vocabulary. At this point in my career and life, I’m able to articulate that, but at the time, I just wanted to explore what was possible while living and moving on wheels. I always felt such an enormous amount of support from my peers, which is why we created the character Hudson, who comes over to figure out how to translate “Dancing Through Life.” I always felt like my peers had my back and they believed in me. So that’s probably my favorite part of the book, when they come together and dance together and Hudson’s in their own wheelchair, and they get to experience this beautiful moment of both being on wheels and exploring what that meant for the choreography in the show.

That was such a cool scene—I’ve never read one like that before.

It’s one of those private, vulnerable moments that I’ve had with people. When we went to outline this book, I really wanted to include the moments that were scary growing up—the first time when I was meeting new people, or getting cast in a show, or auditioning, or trying to figure out how to translate the movements. Those were the moments that I wanted to put out into the world, because they are so relatable, whether you’re in a wheelchair or not: being nervous and afraid and so exposed, then coming out the other side and feeling more confident than ever.

As a theater nerd, did you get a kick out of writing all the many references and puns about musicals?

That was such a fun part of writing this book, because it allowed both Stacy and I to let our theater kids come out. It just reminds me of that hashtag right now, #ifyouknowyouknow for theater people. It’s a part of what makes the book really specific.

And why did you choose Wicked in particular as the musical that Nat and her friends are working on?

Elphaba [the green-skinned protagonist of Wicked] is such an inspiration. Everyone limits her yet she believes that she can overcome and be unlimited, and that’s directly what we wanted that storyline to be. It was a perfect musical to choose!

What do you want readers to take away from Nat’s story?

No matter whether you have a disability or not, everyone has challenges, everyone has limitations. And if you are able to be creative and trust other people and have a group that has your back, I really believe you can do anything. And what’s exciting to me is that there are all these problems that happen in this story, and it’s about who is unafraid to roll up their sleeves and get creative in solving those problems. That is such a gift—when we grow up with challenges in parts of our lives that are really hard, we’re so equipped everywhere else to solve problems and to overcome and move past things that come our way.

Stephan Lee is the author of K-Pop Confidential.