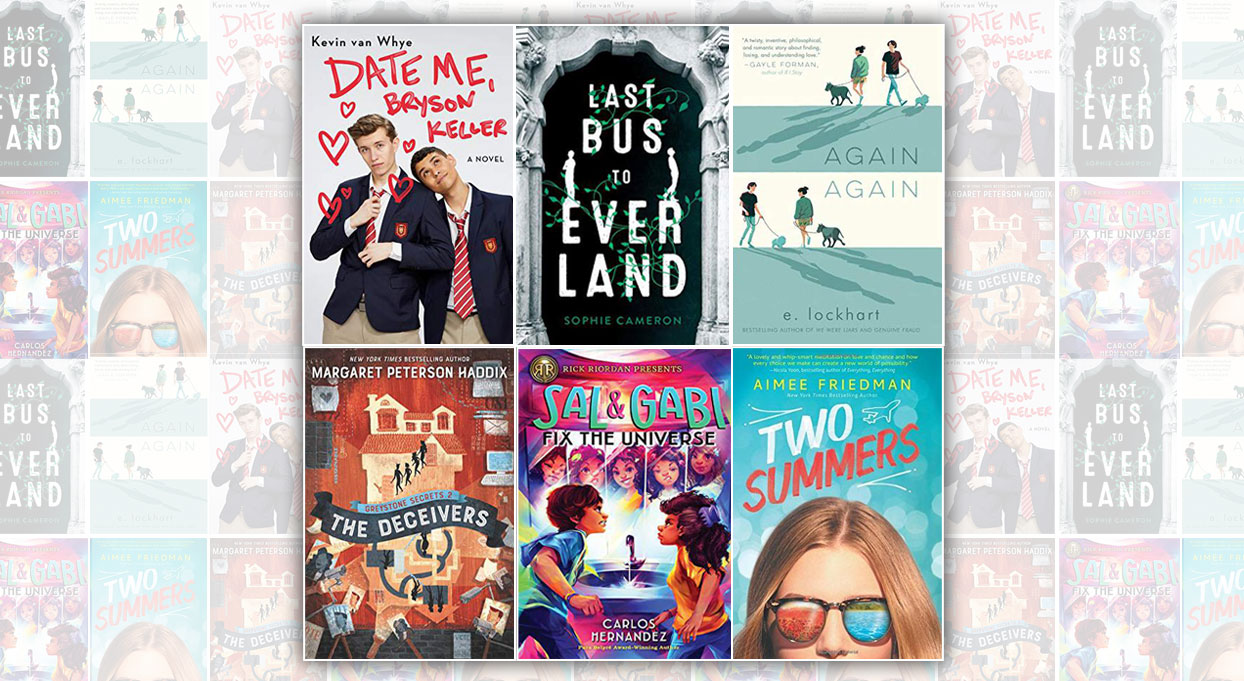 As the U.S. heads into summer vacation, young people are facing a reality that diverges dramatically from what they originally dreamed of—whether that was a sleepaway or day camp, a job or internship, hanging out with friends, or just a break from school. Across the country there are ever changing guidelines and ongoing uncertainty, and after being stuck at home for months, many children and teens now face...being stuck at home for months. The gap between reality and what should have been feels unusually vivid. Novels that explore the idea of parallel universes or alternate life paths might feel especially relevant to young readers right now.

In Margaret Peterson Haddix’s middle-grade series Greystone Secrets—The Strangers (Katherine Tegen/HarperCollins, 2019) and The Deceivers (April 7)—the Greystone kids (Chess, Emma, and Finn) and their friend Natalie discover a parallel world. First the Greystones’ mother disappears into it after learning of a family that has unsettling commonalities with their own. In the second volume, Natalie’s mother, too, goes missing, and the kids must now try to rescue both women. Exciting science-fiction adventure stories with an engaging puzzle element, the books also explore more serious questions around family and reality.

The Sal and Gabi series by Carlos Hernandez offers middle-grade readers a madcap romp through alternate dimensions. In Sal and Gabi Break the Universe (Rick Riordan Presents/Disney, 2019) and Sal and Gabi Fix the Universe (May 5), the Miami middle schoolers explore the multiverse and try to manifest a different reality, one in which Gabi’s premature baby brother survives. Although Sal loves his stepmother, there is something comforting, if chaotic, about visits from the various versions of the Mami Viva who show up when Sal opens portals, deliberately or accidentally. They offer temporary relief from painful memories of his deceased Mami Muerta but also show how unresolved his grief is.

In YA fiction, E. Lockhart’s Again Again (Delacorte, June 2) offers a poignant take on the what-ifs that so often accompany romantic relationships as well as family crises. Newly single Adelaide, a student at the exclusive prep school where her father teaches, spends the summer before her senior year exploring her relationships with Jack, the boy she’s daydreamed about since he wrote her a poem, and Toby, her brother, who struggles with opioid addiction. She’s also had to adjust to higher academic standards and an entirely different peer group than at her Baltimore public school. The novel sensitively charts different pathways for this thoughtful young woman.

Kevin van Whye’s Date Me, Bryson Keller (Random House, May 19) features two high school boys who spend a week exploring what life would be like if they were boyfriends. Kai is gay and closeted, and popular soccer team captain Bryson, the boy he has a crush on, has so far only gone out with girls as part of the dating challenge his friends set for him. When Kai gets up the nerve to ask Bryson out—and according to the rules, Bryson must accept—both boys learn a lot about themselves and one another. As our review said, while it’s “deliciously heavy on fluff” this novel “also delves into more complex subjects like faith, racism, and homophobia.”

The dream of escaping to a world where one’s problems do not exist is universal. Last Bus to Everland by Sophie Cameron (Roaring Brook, 2019) is a haunting and evocative story about Brody, an Edinburgh teen weighed down by bullying from peers and by being closeted. He has a warm, loving family, but financial and other stressors take a tremendous emotional toll. A chance encounter leads him to a magical world that can only be accessed through doorways that appear around the world at certain times. In Everland, Brody can be his full self, completely accepted by others who find their way inside. The question is, should he choose to stay there?

Those seeking a diverting beach read (even if the “beach” is a lounge chair in the garden) can’t go wrong with Two Summers by Aimee Friedman (Point/Scholastic, 2016), in which Summer Everett goes to France…or doesn’t. It all hinges on whether she answers her phone shortly before boarding a plane to visit her long-absent father. In the diverging storylines, Summer either answers the phone, learns that her father is canceling the visit, and stays in her quiet New York suburb—or carries on and has an Instagram-worthy (if emotionally intense) summer in the south of France. Both ways, Summer experiences romance as well as significant growth.