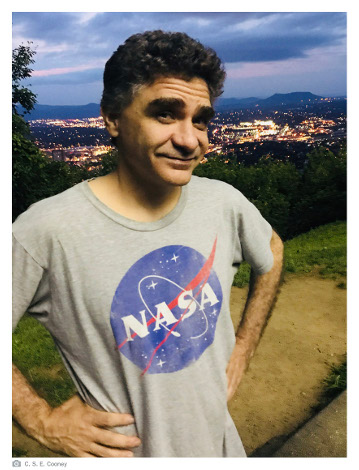 In the past few years, the genres of fantasy and science fiction have undergone something of a renaissance, with an explosion of new voices and stories. “Later generations are going to look at the science fiction and fantasy that’s being written right now as the high literature,” Carlos Hernandez predicts.

As an English professor at the City University of New York, Hernandez is very familiar with the literary canon, but he’s fascinated by the potential of science fiction and fantasy to explore different types of stories and ideas. “They expose more clearly and baldly and brazenly and excitedly those facets that really excite me—the idea-driven parts and the mythic parts,” he says. Science fiction especially is uniquely relevant in our increasingly technological world, so Hernandez has found himself turning more and more to the conventions of that genre even as he draws on the lessons learned from great works of the past.

His new novel Sal and Gabi Break the Universe takes on a classic science-fiction trope: the multiverse. Salvador Vidón is a seventh-grader at a performing arts school in Miami, where he spends most of his time practicing stage magic and sleight of hand. But he’s also capable of one very real trick: summoning people and objects from alternate dimensions. Unfortunately, Sal’s repeated summonings, especially of alternate versions of his dead mother, create chaos in both his family and the world around him.

Inspired by his love of video games, Star Trek, and choose-your-own-adventure novels, Hernandez wanted to use the idea of multiple timelines to explore moral dilemmas. “Like every good choose-your-own-adventure reader, I cheated all the time to see all the other options,” he says. “I kept my finger on page 33 while I glanced at 47 to see which way would be better.” In real life you get only one chance to see the effects of your actions, but with multiple timelines you can consider all the different options.

Hernandez has written about these themes (and characters) before, but Sal and Gabi is his first time writing for a younger audience. “Because I have kind of a scatalogical sense of humor…that maybe never got past age 7 and because I think we should be writing stuff that children read and get excited about and that is challenging and juicy and meaty, I just didn’t think it was all that hard,” he says.

This attitude is shaped at least in part by the fact that, as an 11-year-old, Hernandez decided to read War and Peace.He certainly didn’t understand every detail of the story, but he still remembers ideas and images from the novel. “That middle-grade time is a time when you could pretty much take on everything, and you might not get every single subtlety, but you get pretty much everything you need,” he says.

However, Hernandez also wanted to make sure that his story reflected the experiences and attitudes of young people today. In particular he strove to emulate the broad ethos of acceptance he sees in his students. It’s an attitude of “you tell me who you are, rather than I’m going to categorize you and tell you who you are,” he says. The characters treat each other with a kind of respect and kindness that is rare in fiction but profoundly comforting.

Sal and Gabi’s world is an undeniably aspirational one. There’s little sexism or racism, and their school, which is mostly populated by Cuban-Americans, is dedicated entirely to the arts. The book has no real villains and instead focuses on the characters’ attempts to navigate the challenges life throws at them. “The universe is hard enough even if you have everything working in your favor,” Hernandez says.