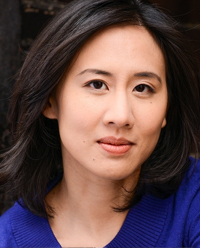 The germ of Celeste Ng’s debut novel, Everything I Never Told You, arrived in a story her husband told her. When he was in grade school, a classmate had pushed his little sister, who couldn’t yet swim, into a lake. “I started thinking, what kind of family dynamic was happening,” Ng says, “that might have led this brother to push his sister into the lake? And what was it like after that happened?”

That little girl morphed into Lydia Lee, around whom Everything I Never Told You revolves. Though it’s one of the first scenes Ng wrote, we don’t see Lydia’s older brother, Nath, push her into the lake until more than halfway through the book. By then, we have a deep sense of Lydia’s family: intelligent eldest Nath, quiet youngest Hannah, stoic and intellectual father James, and Marilyn, the mother, filled with longing. We know that Marilyn, at one point, left the family; we know that she has returned. We have also known, from the first sentence of the novel, that Lydia is dead.

“This will sound kind of squishy and New Age, but as I start to write into the scenes, parts of the story start to reveal themselves,” Ng says. If Lydia and Nath were alone on the lake when he pushed her in, that meant their mother was absent—and where was she? (Lydia dies later, not at Nath’s hands.) “As I explored why the mother wasn’t present, it started to reveal to me some of the dynamics in the family,” she says. “It kind of spiraled out from there.”

Early on, Ng knew that, somehow, Lydia needed to die, and that her death would be the lynchpin of the story. “In some ways, it was harder to picture her alive,” Ng says. As she delved into Lydia’s backstory, she gave her more and more agency, and “she started to come alive for me a little bit more,” Ng says. “As she became more alive, it became a little harder for me to kill her off.” But kill Lydia off she does.

Ng went through four full drafts over six years. “I knew that the book was going to be about secrets and the things that people don’t say to each other, and the different ways that people interpret the same conversation or the same event or the same scene,” she says. She had most of the story, too. What she didn’t know was how she would structure it. Draft one: multiple, close third-person points of view, which meant showing the same scenes repeatedly. Draft two: a braided timeline—present, recent past, and deep past. Draft three was a condensed version, with just present and past, but “the book still needed something to tie all those viewpoints and all those time periods together.” That came in the fourth draft, when she devised an omniscient narrator, straightened out the timeline, and emerged with this cohesive and absorbing book. Ng’s own son, now three, was born between her third and fourth drafts, which shaped the narrative, too: It helped Ng empathize with not only the children in the story (since she’d been a child herself), but with their parents, too.

Which doesn’t mean she agrees with their choices. Unlike so many other young protagonists, Lydia is damaged not by her parents’ abandonment or neglect, but by their overinvestment in her, especially Marilyn’s. (Of course, that is neglect of a different sort.) “When I was a child growing up, every child in every book that I read, pretty much, had been orphaned or abandoned in some way,” Ng says. How might overinvolvement mold a child, and what might be the repercussions?

Ng’s own parents “certainly had very high expectations for me,” she says. “That, I think, is pretty common of a lot of educated, academic parents, and certainly of Asian parents.” Ng’s are Chinese, and she recalls that when Amy Chua’s Battle Hymn of the Tiger Mother came out, “everyone I knew sent it to me and was like, ‘Oh, my God, look at this thing about Asian parents!’ I read it, and I was like, ‘Why is this news?’ ” Her parents’ behavior was not as extreme as Chua’s, but “if I brought home an A, they were like, ‘Well, great! Next time maybe you should try and work harder and get an A-plus.’ Whether that shaped my personality or just matched my goody-two-shoes, overachiever personality, I don’t know.” But while Ng’s parents, like Lydia’s, hoped she would go into the sciences, they accepted and supported her decision to pursue the arts. As with so much fiction, Ng’s personal experience provided the seed, but her fantasies created the story. “I took a little bit of the very high expectations from them,” Ng says of her parents, “but I don’t think it scarred me in the way that it scarred Lydia, because it didn’t have that weight and that kind of intensity that Marilyn has.”

Also, unlike Ng’s mother, Marilyn is white; James, Lydia’s father, is Chinese. While Ng didn’t purposely plan to create a “Tiger mom” out of the non-Asian parent—“that was sort of where the characters led me”—she did get some pleasure out of the subversion of the stereotype. The Lees’ interracial marriage also opens up rich and sometimes harrowing terrain that Ng mines in the novel, which she chose to set in the 1970s. At the time, of course, interracial marriages were both rare and stigmatized. “Now, it’s getting to be much more common,” Ng says; her own husband is white. “But at the time, it would’ve been a much bigger deal.” The racism depicted in the novel, however, is another story. Though Ng grew up in the ‘90s, “virtually all of the overtly racist things, large and small, in the book,” she says, “are things that either my family experienced or other Asian families that I knew experienced. Sadly, I didn’t really have to do much research on that at all.”

Jessica Gross is a writer based in New York City.