We talk to the illustrator of THAT IS MY DREAM! 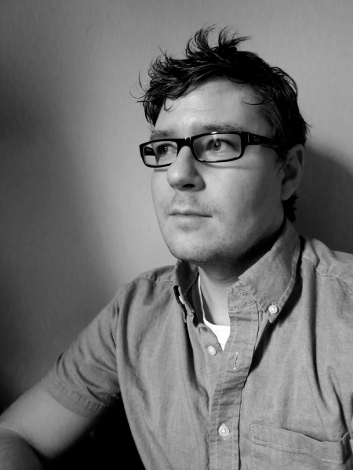 “To fling my arms wide / In some place of the sun, / To whirl and to dance / Till the white day is done,” begins Hughes’ famous poem, whose two stanzas juxtapose stark and hopeful versions of a day in the life of an African American in the early 20th century.

“To hear this writer speaking from a point of view that so clearly and distinctly was not my own was jarring to my teenage self,” says Miyares, who encountered the poem as a high schooler in suburban Simpsonville, South Carolina. “His America was not my America at all.

“How [Hughes] could use seemingly simple adjectives to create such evocative and transformative imagery,” he says, “to convict me with his writing—right away, I knew poetry was the thing.”

Miyares, who lives in Kansas City, Missouri, with his wife and their two children, is the author-illustrator of Float, an ALA-ALSC Notable Children’s Book, Pardon Me!, and Bring Me a Rock!; and the illustrator of Surf’s Up by Newbury Medalist Kwame Alexander.

Painted edge to edge in gouache on paper, That Is My Dream! is an extraordinary 32-page, full-color illustration of “Dream Variation.” The gorgeous, dreamy layered paintings represent a departure in style from Miyares’ earlier books, which were digitally created.

“With picture books, I’m trying to get at what is authentic about the story I’m trying to tell,” says Miyares, who calls his return to paper and paint a rejuvenation and a liberation. “How do I communicate that emotion as best and as fast as possible? Putting brush to paper has amped that up...I can use the same materials people have been using for thousands of years to tell a story in a new way, and that’s exciting.”

The project was proposed to Miyares by his creative partners at Studio Goodwin Sturges and subsequently pitched to Anne Schwartz and Lee Wade of Schwartz & Wade, an imprint of Random House Children’s Books.

“The more I considered it, the scarier it got,” says Miyares, who strove for an interpretation that was appreciative, not appropriative.

“It just seemed monumental to try to juxtapose these two versions of a day,” he says, “—one that was the harsh reality of this person’s life. I imagined [the speaker] as a young boy, this tender observant kid who’s experiencing inequality on a daily basis....What are his aspirations? What is he hoping for?”

In That Is My Dream!, Miyares depicts Hughes’ opening stanza with images from the day in the life of a young black boy living in a mid-century American town. With arms flung wide against a pale sky to greet the main street bus, the boy boards with his mother and sister. They ride in the back while a white family (also mother, daughter, and son) sits up front. In town, these two families shop at opposite ends of the block. Later, the boys sip side-by-side from segregated water fountains.

But when Hughes’ poem turns on the line “That is my dream!” Miyares takes the imagery to new heights, as the black and white children join together in play, mounting birds and soaring through a fantastic sherbet sky. They “Dance! Whirl! Whirl!” and, returned to earth, the boys drink side by side from the same cool clear stream.

segregation, contrasting them against the joy and peace that come from the freedom for all children to make friends who don’t look like them.”

“If I could share a story about empathy,” Miyares says, “in a way that doesn’t hide the realities of [racism and injustice] but really speaks to our own place in it...that’s the reason why I wanted to do it.

“Langston Hughes’s writing is so needed right now,” he says. “What an honor to be able to share it.”