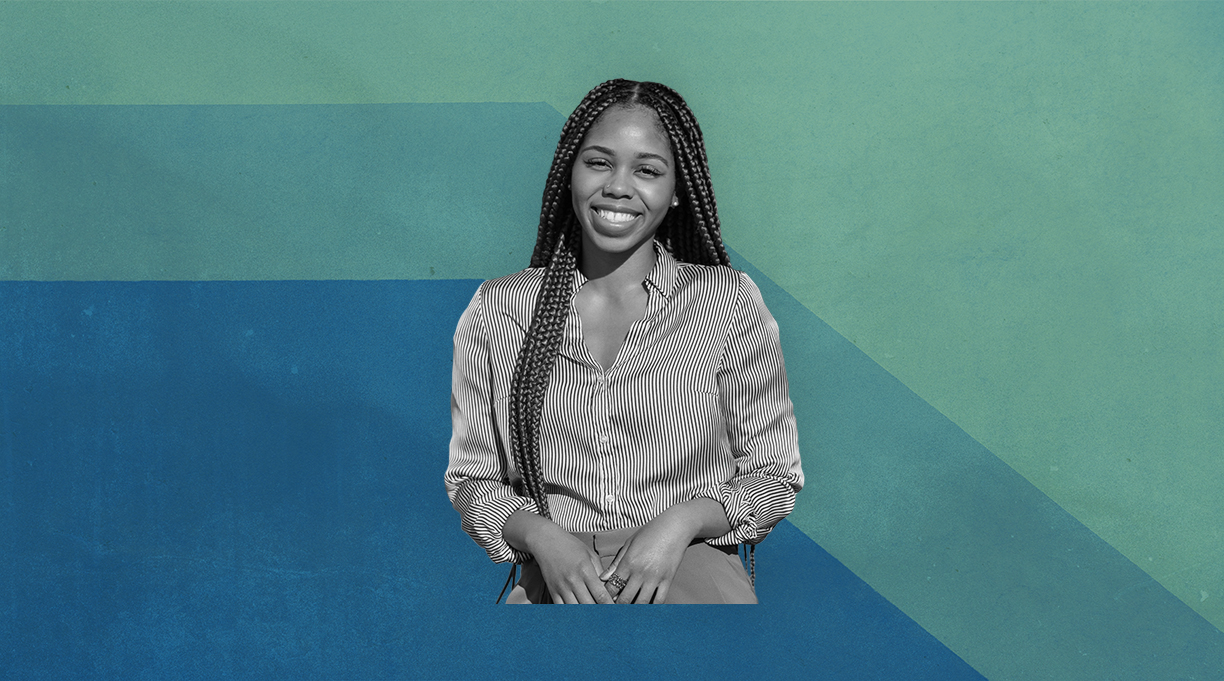 Photo of Derecka Purnell by Allysa Lisbon. Background by Pawel Czerwinski on Unsplash

Derecka Purnell has a very full plate. She is a mother, a civil rights attorney, and a columnist at the Guardian.Her activism began early in life, and she was inspired to go to law school to protect people from the civil rights violations she witnessed on the news as well as in her day-to-day life. Becoming Abolitionists: Police, Protests, and the Pursuit of Freedom (Astra House, Oct. 5) is her autobiographical exploration of the trauma that police violence inflicts on Black Americans; it received a starred Kirkus review for its insight into the problematic nature of policing, including constitutional policing—that which upholds the U.S. Constitution and individual civil rights. Purnell highlights her evolution from cop-caller to abolitionist and dissects the violence in policing culture. She spoke to us by phone; the conversation has been edited for length and clarity.

Aside from being an author, you are also a civil rights lawyer. Tell us about your work.

I’m a lawyer, so I help other organizations figure out how to use law and policy. I also have a column at the Guardian, but I took a little bit of a hiatus to finish the book. I am an organizer, I parent, I have two kids whom I love dearly and spend a lot of time with. I also want to open up a used furniture store.

You had your first baby right before law school. Tell us more about the experience of going to law school as a new parent.

Law school is honestly the best time to have kids. I was a teacher before then, and it was a bit challenging. I had a supportive partner, and it sort of worked out. What’s actually really sad was that I knew so many people, particularly women, who were terrified of having kids in law school, and scared when they graduated, because if you are a woman, you are less likely to be promoted in a firm. I had lots of flexibility when I was a student, because you’re sort of in a bubble. I felt very lucky for the situation I had. Then I had my second kid right before I graduated.

You were also a legal observer at protests. Can you tell us more about what it was like to have this experience?

[Your experience as an observer] depends, sadly, on your race and gender. You are trained to go into protests and monitor police behavior and the behavior of government actors. You check to see what they’re wearing or if their badges are covered. If they’re wearing gloves, they don’t want their DNA to be left behind. [We have to be] prepared to see how police show up at protests and how they interact with activists, and [make] sure the activists know what their plan is or who they are going to call if they get arrested. Also to make sure [protestors] have a way to get out [of the protest] if they choose to get out.

How did acting as a legal observer influence your views as an abolitionist?

Early on, when I first started learning how to be a legal observer, I had this idea that OK, these are protests. I think I generally know what acceptable and unacceptable police behavior is. But I started learning more about the complete powers police have to be violent against protesters. The police have a lot of constitutional power to be violent. Actually, constitutional policing is the cause of much more violence than unconstitutional policing. I’m trying to keep track and monitor what people can and cannot do. Because they have so much free reign, we have to try to figure out how to stop that as well.

In the introduction to your book, you describe abolition as “utopic” and explain that you originally thought it was an idea created by White activists who did not have a grasp on reality. Over time, your perspective changed. Can you tell our readers about your journey?

I can talk generally about how the idea came to be, so maybe something that will be helpful to say is that I was interested in writing the book exactly as I did: from being someone who called 911 to someone who is an abolitionist. I wanted to talk about George Zimmerman killing Trayvon Martin and not being arrested. After protesting and organizing for George Zimmerman to go to prison, many activists went from that to being abolitionists. One critique of abolition is that we are not realistic. [But] many of us have decades of organizing experience within the legal system. We know it inside and out, because many of us are lawyers. We run bail funds and jail campaigns. We tried to reform the system for 10, 20 years. I wanted to explain how we moved from being very committed to reform to being critical thinkers and abolitionists fighting for a different society.

You mention that even when you called the police you were nervous about what they would do.

There were so many encounters. Like when a cop showed up to my house at 16 to remove me, or when a cop showed up with a social worker in third grade to take me to foster care. When a friend of mine and I were walking and a cop tried to force us into the car because he said she was too pretty to take the bus. I had all these encounters with cops removing us from our homes, forcing us into their cars, or being armed on our street.

During your time as a public defender, you developed additional insight into the criminalization of poverty. How does poverty affect our interactions with the police?

It was tough because Harvard—like many law schools—[has] a law school clinic for students. One experience that I didn’t get to write about [was] when I was a lawyer in a housing clinic. This was completely eye-opening to me because White poverty had been invisible to me. I was just shocked at the level of racism, classism, sexism. Now, I am representing a broader group of people, all different races, all who have no business being in court, watching judges use loopholes to hold them. I was like, oh this is a mess, and they are pretending that this is justice.

You mention that we often forget the role of policing in mass incarceration.

It’s a very simple thing to forget. Even when there is all this organizing and policy people who are committed to reducing incarceration to 50%. How could we reduce the prison population without also reducing police, prison guards, prosecutors, and all of these actors that maintain the system—they all have to go, too!

What other projects are you working on right now?

I’m finishing up a chapter for a textbook on mass incarceration. I’m working on two more books: One is about the history of Black-on-Black crime as a phrase and a phenomenon. One is about protestors who have perished since the Ferguson uprising. I accepted a position at Columbia Law School, and I am moving to New York City to do that. Lots of things happening.

Nia Norris is a journalist in Chicago who writes about culture and social issues.