Dispatch From the ALA Annual Meeting 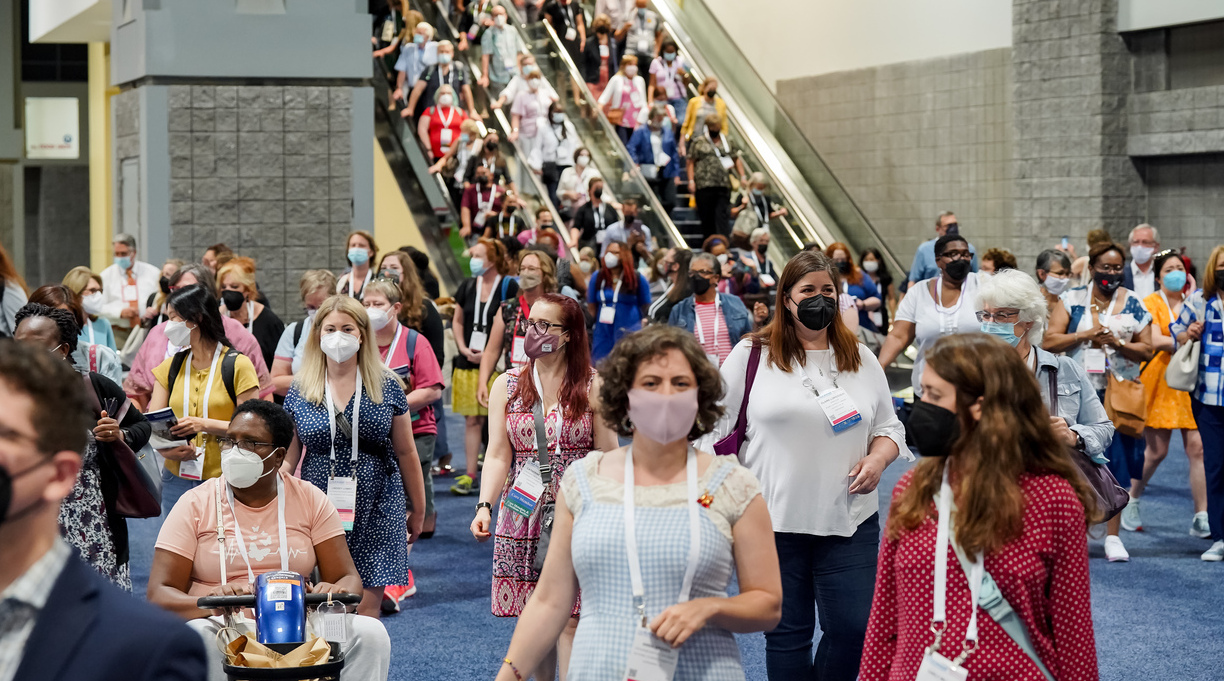 Attendees at the ALA Annual Meeting in Washington, D.C., last weekend. Photo by EPNAC

Some things are better in person—it’s hard to imagine a virtual version of the rabbit pen on the exhibit floor at this year’s American Library Association annual meeting, held in Washington, D.C., June 23-28. The bunnies, in training to provide support to the people of Uvalde, Texas, were an especially welcome distraction. This year’s conference was a fraught one. This was the first time ALA had held an in-person conference since 2019, just before the pandemic made virtual events the norm, and while it was thrilling to bump into friends and colleagues I hadn’t seen face to face in years, it was tough to fully throw myself into the festivities; I had arrived in D.C. just a day after the Supreme Court announced its decision to overturn Roe v. Wade, and the news weighed heavily on me and nearly everyone I spoke to.

Librarians expressed exhaustion at the overwhelming wave of censorship; I heard countless librarians swap stories about book challenges, with titles on LGBTQ+ themes bearing the brunt. Given that books centering the experiences of marginalized people are especially vulnerable, many attendees were disturbed and angered to hear librarian and author Nancy Pearl, speaking on a panel on censorship Saturday afternoon, state that even Holocaust denial literature had a place in libraries—words that Pearl walked back on Twitter several days later.

But a fighting spirit permeated the air, too, and I spoke with many publishers, librarians, and advocates seeking ways to use their platforms for good. I connected with colleagues at other review journals who are eager to find a way to support librarians facing censorship attempts—conversations we plan to continue in the coming months. One of my good friends, a public librarian, made time in her bursting schedule to protest outside the Supreme Court. At the Coretta Scott King Awards breakfast, Simon & Schuster and author Jason Reynolds announced a yearly travel grant to allow five African American librarians for youth or teens to attend the conference; Reynolds noted that Black librarians had championed his work early on and emphasized his own commitment to inclusivity.

At that breakfast, I was also heartened to meet Angela Joy and Janelle Washington, the author and illustrator, respectively, of Choosing Brave: How Mamie Till-Mobley and Emmett Till Sparked the Civil Rights Movement (Roaring Brook Press, Aug. 9); when I interviewed them earlier this month over Zoom for our Aug. 15 issue, both noted that despite the threat of book bannings, they want children to know the truth about American history. I’m confident that I’ll see Joy and Washington at next year’s CSK Awards—this time accepting their own awards.

Throughout the conference, joy intertwined with sorrow. Accepting his Coretta Scott King Illustrator Honor for Nina: A Story of Nina Simone (2021), written by Traci N. Todd, Christian Robinson opened by singing Simone’s “Feeling Good” before discussing how he felt the singer’s spirit as he and his brother made a road trip in 2020, during the height of the pandemic, in search of their mother, who was unhoused and grappling with mental illness. And the late Floyd Cooper’s son Dayton offered poignant remembrances as he accepted, on his father’s behalf, the award for Best Illustrator for Unspeakable: The Tulsa Race Massacre (2021), written by Carole Boston Weatherford.

The Newbery-Caldecott-Legacy Award Banquet—which marked the Newbery’s centennial—felt similarly bittersweet. Before dinner, I ran into Jerry Craft, who was excited to attend his first in-person Newbery banquet; the world shut down just a few months after his Newbery win for New Kid (2019). Jason Chin, accepting the Caldecott for Watercress (2021) by Andrea Wang, invited the audience to applaud winners from the previous two years, who had missed out on the chance to hear that sound themselves. Still, the joy was pervasive; Wang, who received a Newbery Honor, and Chin wore clothing (a dress and a tie, respectively) that evoked the vibrant green hues found in their book, while Shawn Harris, who accepted a Caldecott Honor for Have You Ever Seen a Flower? (2021), wore a floral garland on his head.

It was clear that the kid lit world’s sense of community hasn’t flagged. Accepting the Newbery Award for The Last Cuentista (2021), Donna Barba Higuera spoke of how, following the announcement of the Newbery Awards earlier this year, she and her fellow honorees began reaching out to one another often, sharing both moments of triumph and sadness. And Chin’s words of gratitude to his mentor, illustrator Trina Schart Hyman, left attendees moved.

Through it all, I loved catching quick glimpses of the authors and illustrators whose titles have brought me so much delight: Steve Sheinkin on the escalator; Andrea Davis Pinkney strolling by a booth. It was no less rewarding to see books in the flesh, too, and I pored over finished copies of books that Kirkus has covered over the last few months—like Kim Jihyun's sumptuous The Depth of the Lake and the Height of the Sky (Floris, April 19)—and got a peek at upcoming works, such as Kwame Alexander’s An American Story (2023), which offers an unflinching chronicle of U.S. history, with illustrations by newcomer Dare Coulter. Seeing these books fills me with optimism. While the past two years have been devastating, there’s plenty to look forward to—including the hope, perhaps idealistic, that next time the annual meeting is held, we’ll have triumphs to celebrate.

Correction: An earlier version of this story misstated the prize that Shawn Harris received for Have You Ever Seen a Flower?