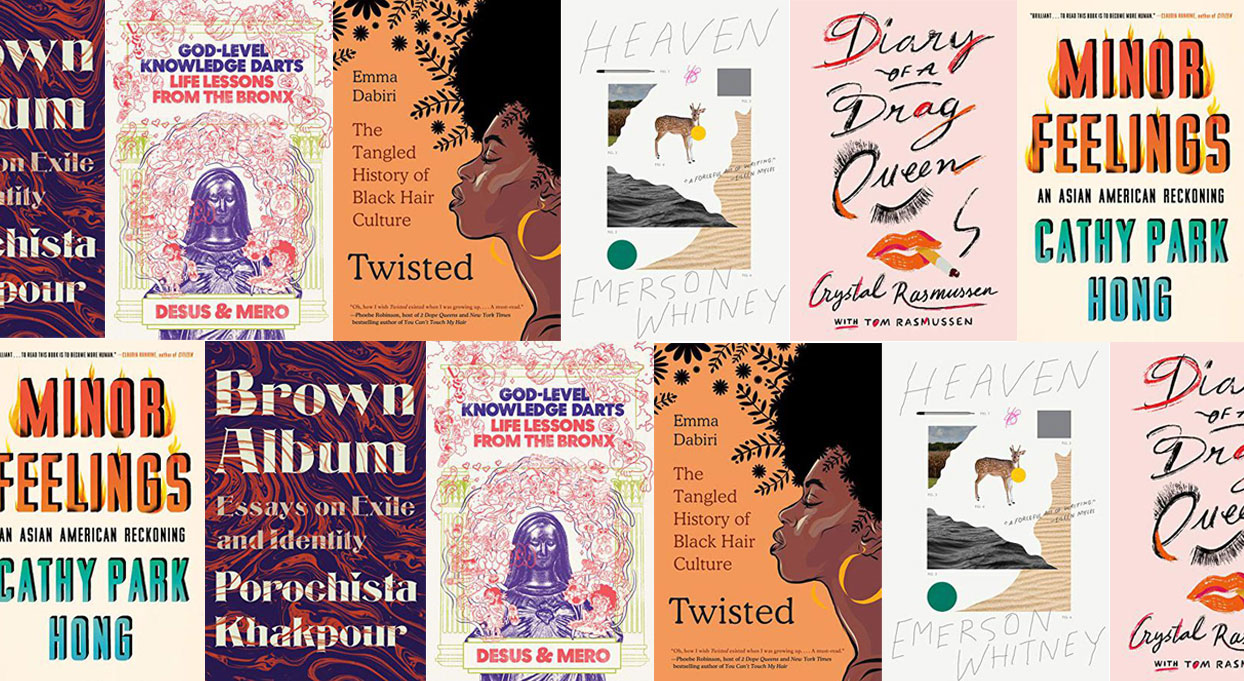 Kirkus’ Diversity Issue is one of my favorites of the year, and in the spirit of the theme, I wanted to provide a wider variety of recommendations than usual. So here they are, my lucky 13 recent—or forthcoming—books that celebrate diversity in all its magnificent forms. My reviewers usually say it best, so I’ll get out of the way and quote their reviews.

Nicole Chung and Mensah Demary, A Map Is Only One Story (Catapult, Feb. 11): “Two Catapult magazine editors gather essays about immigration and ‘the meaning of home’ from 20 emerging and established women writers….A provocatively intelligent collection.”

Emma Dabiri, Twisted (Perennial/HarperCollins, moved to June 23): “Part memoir, part social history, and sure to become the definitive book on the politics, culture, and economics of black hair.”

Annie Finch, Choice Words (Haymarket, April 7): “A powerful collection of poems, fiction, and essays on the reality of abortion….Finch has drawn together writers across time (from the 16th century to the present), place, race, ethnicity, gender, age, and culture who offer stark, often wrenching revelations.”

Kent Garrett, The Last Negroes at Harvard (Houghton Mifflin Harcourt, Feb. 11): “An alumnus of the Harvard class of 1963 recounts an experiment in affirmative action and its lasting effects….A fine contribution to the literature of civil rights and the African American experience.”

Cathy Park Hong, Minor Feelings (One World/Random House, Feb. 25): “The poetry editor of the New Republic…offers a fierce and timely meditation on race and gender issues from her perspective as a Korean American woman….As she sees it, the United States has achieved dominance through ‘the capitalist accumulation of white supremacy.’ ”

Mikki Kendall, Hood Feminism (Viking, Feb. 25): “The author frankly highlights how issues like race, food insecurity, gun violence, and poverty, among others, are all feminist issues, with many of them overlapping or serving to exacerbate others….Kendall demonstrates the problems with mainstream feminism’s lack of consideration of intersectionality.”

Porochista Khakpour, The Brown Album (Vintage, May 19): “A collection of incisive essays about hyphenated identity….Provocative pieces that detonate many notions of identity.”

Crystal Rasmussen Tom Rasmussen, Diary of a Drag Queen (Farrar, Straus and Giroux, April 14): “A British queer performer’s account of the tumultuous year that became their defining moment. In this gloriously outrageous memoir, Rasmussen, who speaks both as “Tom” and their performance alter ego “Crystal,” tells stories about the tribulations and triumphs of life as a drag queen.”

Bakari Sellers, My Vanishing Country (Amistad/HarperCollins, May 19): “In a candid and affecting memoir, CNN political analyst Sellers, the youngest member of the South Carolina Legislature when he was elected in 2006, chronicles his evolution as a political activist....A strong voice for social justice emerges in an engaging memoir.”

Meredith Talusan, Fairest (Viking, May 26): “The author examines queer otherness with relentless honesty, and she investigates how accidental whiteness did not automatically lead to the fairest outcomes, either for herself or others.”

Emerson Whitney, Heaven (McSweeney’s, April 14): “ ‘This is the question of my body and my story about it: is it just mine?’ So writes Whitney early on in the narrative, which is fragmented, elliptical, and consistently provocative….An incisive, nuanced inquiry into gender and body.”